US to play Nigeria, Turkey in friendlies 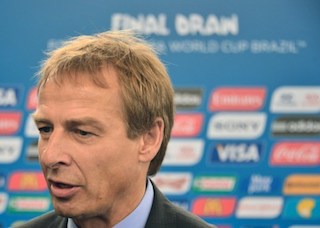 The United States will face Nigeria, Azerbaijan and Turkey in tune-up matches before going to Brazil for the World Cup, the USA Soccer Federation announced Thursday.

A day after losing 2-0 to Ukraine in a friendly in Cyprus, the Americans revealed a run of three matches over 12 days across the nation that will simulate the travel and scheduling issues they will face in Brazil.

The US will play Azerbaijan on May 27 in San Francisco, then meet Turkey at Harrison, New Jersey on June 1 before travelling to Jacksonville, Florida, to face World Cup-bound Nigeria on June 7.

“We’re absolutely thrilled with the schedule we’ve put together,” US coach Jurgen Klinsmann said. “We have some fantastic opponents that will help us get prepared for the teams we will meet in the World Cup and also the opportunity to experience different climates and conditions.

“It’s the perfect way to start our journey.”

The Americans will stage their World Cup training camp in mid-May but have not announced the exact dates and location.

After the Nigeria match, the Americans will depart for Brazil, where they will train at Sao Paulo FC headquarters.

The US were drawn into Group G along with Ghana, the team that has knocked them out of the past two World Cups, Portugal, featuring superstar Cristiano Ronaldo, and Germany, the team for which Klinsmann once played and coached.

The Americans have a win, draw and defeat in previous matches against Turkey, have never faced Azerbaijan and beat Nigeria 3-2 in 1995 in their only meeting with the Super Eagles.