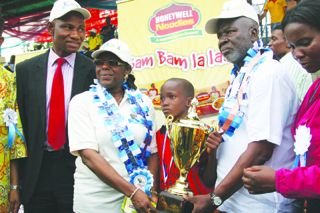 The tournament was staged to celebrate the memorial of Chief Awolowo by Obafemi Awolowo Foundation in conjunction with National Youth Soccer Association. The kids from Lagos Island defeated their counterparts from the same neighbourhood, Greater Tomorrow, 4-3 through a penalty shootout in a thrilling final watched by dignitaries that also included former Deputy of Lagos State, Mrs. Sinotu Aderoju Ojikutu, Senator Bode Olajumoke, founder of Odua People’s Congress, OPC, Chief Gani Adams, and Commissioner for Sports, Osun State, Kola Balogun and others.

The pulsating encounter had earlier ended 3-3 before the winners, who went home with N250,000 emerged through a penalty shoot-out. Greater Tomorrow got N150,000. The third place match was won by Ajah Football Club whichdefeated Adeomo FC from Ogba 2-1. The kids from Ajah were rewarded with N100,000.

Chief Osoba said that he was impressed with the tournament as it represents the aspiration of the late sage who in his lifetime believed in tapping talents from the grassroots in politics and other areas of life.

“This is a good competition and I’m impressed with the display by these kids. The organisers have really shown that Chief Awolowo is not dead but lives in the minds of all Nigeria,” said the All Progressive Congress, APC. chieftain.

To Chief Adebutu, tapping talent from the grassroots is the best thing that could guarantee a bright future for Nigeria football, adding that if the kids at the Awolowo U-10 Cup can be nurtured and groomed very well, they are stars of tomorrow.

Executive Director, Obafemi Awolowo Foundation, Dr. Tokunbo Awolowo-Dosunmu, said that despite the fact that her late father died 27 years ago, tournament like this shows that he still affect the lives of Nigerians positively.