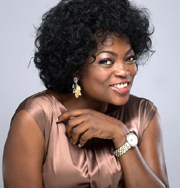 As Africa’s film and television industry heavyweights arrive Lagos, Nigeria for the 2014 AfricaMagic Viewers’ Choice Awards, holding at Eko Hotel and Suites on Saturday 8 March, Nigeria’s top actresses, Funke Akindele, Nse Ikpe-Etim, Nkiru Sylvanus and Ivie Okujaye are expected to command the spotlight as they jostle for the award in various categories.

Funke got multiple nominations from the Best Actress in a comedy category.

United Kingdom-based Nigerian Producer, Obi Emelonye, tops the list with his Last Flight To Abuja capping six nomintions and is in for the big wins.

In the Best Actor in a Comedy category are Nigeria’s John Okafor, Osita Iheme and Chinedu Ikedieze. For Best Actress in a drama category, Nkiru Sylvanus will have Nse Ikpe-Etim, Ivie Okujaye, Stephanie Wilson and Veronica Waceke to beat.

AfricaMagic also announced a brand new category The New Era Award, which will recognise and honour individuals who have made significant contribution to creating a new era for African film and television. Nominees in this category are: Desmond Elliot, Kate Henshaw, Rita Dominic, Rukky Sanda and Uche Jombo.

Among the most anticipated moments of the night will be the announcement of the TrailBlazer and Industry Merit awards which are not contested for but only decided by the organisers.

In total, 29 awards including nine voted for by viewers, will be handed out with winners coming from fields including acting, directing, writing, editing, costume design, sound, lighting, make-up, cinematography, and art direction across a variety of productions and genres, from drama and comedy features to documentaries, online video and short film.

Biola Alabi, outgoing M-Net Africa Managing Director, congratulated the nominees on their achievement and urged them to use their nominations as a source of future motivation.

“We are so impressed by these skilled persons whose value to Africa must be recognised and honoured. We send all the nominees our best wishes for the Awards, but want to also remind them that their nomination is an acknowledgment of the remarkable work they have done and are continuing to do in creating compelling African entertainment,” Alabi said recently.

Meanwhile, the award ceremony will be boasting of a line-up of top musical acts for the evening, starting at 4p.m with a special Red Carpet broadcast to be hosted by Channel O VJ Denrele Edun, alongside Eku Edewor.

The AMVCA is held in association with MultiChoice Africa and Amstel Malta. It will have as hosts IK Osakioduwa,  Vimbai Mutinihri and Osas Ighodaro.