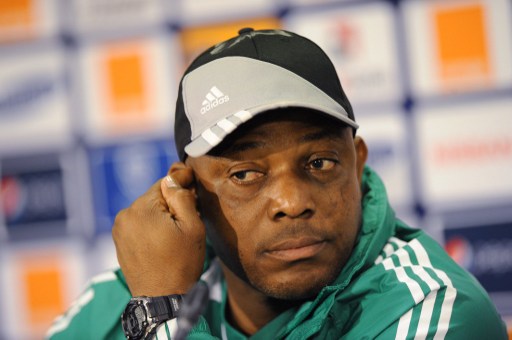 With 94 days to kick off of the Brazil 2014 FIFA World Cup, Chief Coach of Nigeria’s Super Eagles, Stephen Keshi has read the riot act to every player intending to make the world championship, saying they must be in top form for their respective club sides.

The former Hawks of Togo coach said he will only invite players to the camp based on their form, stressing that he would not call any player because he is on the payroll of any big team and not enjoying playing time.

Keshi, who also handled Eagles of Mali, stated further that: “I will only invite players based on merit, I have a long pool of players that I can call up for the World Cup and I want to assure Nigerians that I won’t invite players because they play for big clubs, I will only call players that enjoy quality playing time for their club sides.”

In a related development, newly appointed Minister of Sports and Chairman National Sports Commission, Dr. Tamuno Danagogo says he is impressed with the performance of the reigning African champions in the matches they have been playing so far.

He charged Keshi to build a formidable team for the World Cup while assuring the technical crew of the support of the Federal Government.

“The Eagles have really impressed me, as a Nigerian I know the coaches are capable of building a strong team. The NSC is ready to give the coaches the needed support so they can soar in Brazil.’’