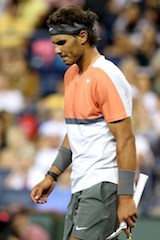 It was a night of two stunning upsets in Indian Wells ATP Masters and WTA hardcourt tournaments as defending champions Rafael Nadal and Maria Sharapova were shown the door by lower ranked players.

Dolgopolov notched his first career win over Nadal after five prior defeats — including a loss to the Spaniard in the claycourt final at Rio de Janeiro two weeks ago.

Serving for the match at 5-3 in the third, Dolgopolov was broken at love with a double fault on break point.

Even then, however, he said he knew he was playing well enough to win.

“The point was just not to get too nervous,” he said. “I knew he’s going to make me play that game and not miss much, and I just gave it away. That was all on me.

“I just tried to forget about that and come back.”

In the tiebreaker, Dolgopolov thought he’d sewn it up with an ace on his first match point, but Nadal challenged and the ball was ruled out.

“I thought, ‘You’ve got to be kidding me,'” Dolgopolov said. “I was thinking he’s going to challenge because I didn’t really raise my hands up or anything after that ace because I knew it was close and I wasn’t sure it was on the line.

“Then I just tried to come back as fast as I could to the line, so I didn’t have enough time to think about it and just serve and start the point.”

He put his second serve in play, and ended it with a stinging forehand.

“I just went for the winner,” he said.

Maria Sharapova, the Russian superstar, currently ranked fifth in the world, was undone by 58 unforced errors, and the two combined for 15 breaks of serve.

“I did not play a good match at all,” Sharapova said.

“She’s quite aggressive, but some shots she hit incredible for a long period of time,” she said.

“But, you know, if I’m speaking about my level, it was nowhere near where it should have been.”

Nadal, too, was dissatisfied with his own performance.

“I played bad, that’s all,” Nadal said. “I’m disappointed with the way I played, but that happens sometimes.”

Nadal, who had struggled in his opener against Czech Radek Stepanek, said his groundstrokes let him down, but his troubles had nothing to do with the sore back that slowed him in his loss to Stanislas Wawrinka in the Australian Open final.

Federer recovered an early break in the second set before dominating in the tiebreaker, staying on track for a possible quarter-final showdown with compatriot Wawrinka.

Wawrinka, who stepped out of Federer’s shadow with his first Grand Slam triumph in Melbourne in January, cruised into the fourth round with a 6-0, 6-2 victory over Italy’s Andreas Seppi.