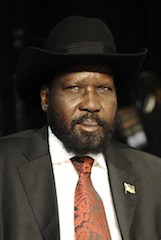 South Sudan charged four high-profile prisoners with treason on Tuesday, dashing rebel hopes that they would be released ahead of peace talks planned in Ethiopia this month.

Rebels led by former vice president Riek Machar have demanded a pardon for the four politicians, all former members of the ruling SPLM party, before the peace talks resume.

The world’s newest state came close to all-out civil war on December 15 when soldiers from rival ethnic groups clashed in the capital Juba. While a ceasefire was struck on January 23, it has since been frequently violated and new talks have faltered.

Thousands have died in nearly four months of fighting which was often fought along ethnic lines, according to the United Nations. Both sides are accused of carrying out atrocities.

The accused men were charged with nine offences, including spreading false information and inciting violence. They have previously denied plotting a military coup and their legal representative said they would also deny all the charges.

The four in the dock were among 11 well-known political figures arrested days after fighting broke out and accused of plotting to overthrow President Salva Kiir’s government. The other seven were sent to Kenya after Kenyan President Uhuru Kenyatta offered to mediate talks between the rebels and Kiir.

Mayen asked on Tuesday for the seven to be sent back to South Sudan so they could also be tried. “The government was under pressure to release those people. They were released on bail to Kenya. All the eleven must face charges,” Mayen said.