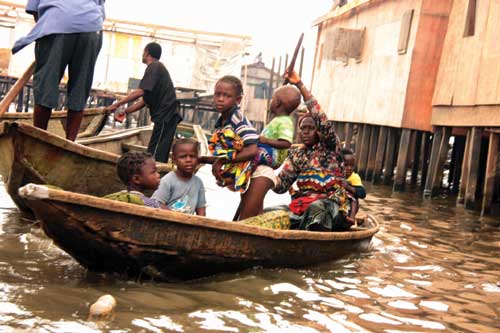 •Mother and her children on the lagoon: Moving on water can be dangerous

Nigeria’s National Emergency Management Agency (NEMA), on Wednesday confirmed that 13 dead bodies have been recovered from the boat accident in Lagos on Tuesday.

He said the accident occurred while the boat was trying to cross the passengers from one side of the road to the other over a distance of about 10 metres.

Farinloye said the boat had over 15 passengers and confirmed that among the dead were two children, while five persons were still missing.

The NEMA official said that there were six survivors.

He added that a distress call came to the agency at 11.10 p.m. on Tuesday and said that rescue operation led to the recovery of the bodies.

Farinloye said that NEMA in collaboration with other emergency service agencies was continuing with the rescue operation.

Oke-Osanyintolu told NAN on Wednesday that the surviving victims had been taken to hospital for treatment.

“Thirteen persons have been confirmed dead and their bodies recovered, while six of the victims have been taken to the Lagos State University Teaching Hospital (LASUTH) for treatment,’’ he said

He added that rescue operation by the agency was still ongoing.