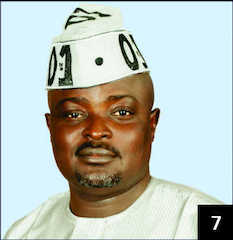 A member of the Lagos State House of Assembly and Chairman, Committee on Economic Planning and Budget of the House, Mudashiru Obasa, has disclosed how he had to survive selling nylon bags on the streets of Lagos.

He said he later graduated into selling wristwatch when his dream of travelling abroad for greener pasture was truncated and all the money he had saved went into the unfulfilled dream.

Obasa, a three-term member of the House representing Agege Constituency 1, narrated the challenges of his growing up years to journalists saying his experience has taught him not to believe much in unemployment.

He advised people to find things to do to earn a living instead of going about begging for alms.

“I did all this on my own volition and not because my father could not afford to pay my school fees, but the friends I grew up with were always in one engagement or another.

“We would go to Agege Motor Road to sell nylon bags. Then, 12 nylon bags is half the price when we buy and you would make times two of the amount you invested. Within few hours, you would have sold an encouraging amount.

“I was once a bus conductor, I was a labourer…just mention it.

“In the early 1990s, I started working with Saftrust Nigeria Limited and was posted to the Nigeria International Bank as a contract staff. I was a school certificate holder.

“I then met a friend, a French citizen who set up a company that dealt in corporate gifts. I approached him and crossed over to his company. I was the only black man in their midst and was the one delivering the items to companies and receiving the cheques,” Obasa narrated.

He said he left the place with the hope of travelling abroad but that things did not work out as he planned. He spent all his savings trying to travel out of the country “for greener pasture.”

After the frustration, he went back to the company but his position had been occupied.

“For me, I don’t believe in staying idle and that is why when people approach me asking for assistance to help them pay their children’s school fees, their accommodation and others, I ask them who is going to pay the next one. So why don’t you find something to do?

As a result, he stayed at home for sometime before deciding to join his childhood friend who was into sales of wristwatch at the Oshodi Market in the state. “Then, I already had a baby boy and needed to care for him and his mother.

“That was how I became a colleague of wristwatch sellers.

“For me, I don’t believe in staying idle and that is why when people approach me asking for assistance to help them pay their children’s school fees, their accommodation and others, I ask them who is going to pay the next one. So why don’t you find something to do?

“That’s also why I don’t strongly believe in unemployment. If your father is not Dangote or Otedola and co, then you must look for something to do.

“It is only one with such as a father that can dictate where he wants to work. You have to be engaged, you have to do something to cross to another level,” he said.