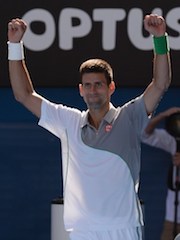 Djokovic: into third round

Djokovic, the world number two and the highest seed left in the draw after the third-round exit of world number one Rafael Nadal, didn’t face a break point in the 68 minute encounter.

Benneteau, playing just the second Masters 1000 quarter-final of his career, faced break points in all but his first service game and was broken twice in each set.

Djokovic awaits the winner of the last quarter-final between big-serving American John Isner, the 12th seed, and Latvia’s Ernests Gulbis.

The other semi-final was set on Thursday, with seventh-seeded four-time champion Roger Federer advancing to a meeting with Ukrainian Alexandr Dolgopolov.