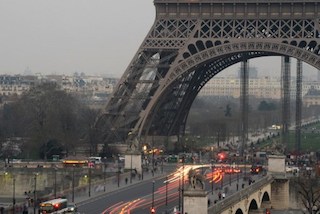 Driving past the Eiffel Tower in Paris

The French government will on Monday introduce alternate driving days in Paris for the first time in nearly two decades to tackle dangerous levels of air pollution in the city.

It is only the second time the French authorities have ever resorted to the drastic restriction, which means that drivers will only be able to use their cars on alternate days.

The government made the announcement after pollution particulates in the air exceeded safe levels for five days running in the capital and surrounding areas.

All public transport was made free over the weekend to persuade residents to leave their cars at home.

By Saturday the number of pollution particulates in the air had fallen slightly after hitting a high of 180 microgrammes per cubic metre — well over double the safe limit — on Friday.

These so-called PM10 particulates are created by vehicles, heating and heavy industry, with the safe limit set at 80 per cubic metre.

But with pollution levels forecast to rise from Sunday evening, the prime minister’s office announced the decision to restrict drivers in and around the capital for the first time since 1997.

Motor bikes are also covered by the restriction, which will allow only vehicles with uneven numbered plates on the road on Monday.

The government also unveiled other pollution-lowering measures including restrictions on vehicle speed and on burning fuel.

It said it would take a call on Monday about whether to extend the restrictions further.

The smoggy conditions have been caused by a combination of cold nights and warm days, which have prevented pollution from dispersing.

The pollution particulates in the air can cause asthma attacks as well as respiratory and heart problems. The World Health Organisation has said finer particulates — known as PM2.5 — are cancer-causing.

“I am amazed to see that a small lobby has managed to convince people that cars were behind this peak in pollution,” said Pierre Chasseray, head of a drivers’ association called 40 Millions d’Automobilistes.

“This measure is worse than unfair, it is stupid.”