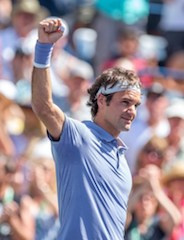 Federer- the Swiss maestro rolls on

Four-time champion Roger Federer marched into the final of the Indian Wells ATP Masters on Saturday with a masterful 6-3, 6-1 victory over Alexandr Dolgopolov.

Federer, the 17-time Grand Slam champion who is seeded seventh here this year, didn’t face a break point in the 61-minute match.

The Swiss great will play the winner of the second semi-final between world number two and second seed Novak Djokovic and 12th-seeded American John Isner.

Federer, the 17-time Grand Slam champion who is seeded seventh here this year, dominated the 31st-ranked Dolgopolov, thwarting the Ukrainian’s bid to become just the sixth player to beat both Rafael Nadal and Federer in the same tournament.

Federer put 72 percent of his first serves in play and didn’t face break point in an efficient display before an adoring crowd at the Indian Wells Tennis Garden’s stadium court.

By reaching the semi-finals, Federer was assured of returning to the top five in the world rankings for the first time since September of 2013.

After a modest 2013 campaign that saw him win just one ATP title, the 32-year-old Swiss has opened 2014 with a title in Brisbane, reached the semi-finals at the Australian Open, and won the title in February in Dubai, where he beat Djokovic in the semi-finals.

The women’s final will be a fight between Flavia Pennetta of Italy and Agnieszka Radwanska.

It was the biggest final of her career.

Radwanska has won four of six career encounters with Pennetta, but the Italian beat her in straight sets in Dubai last month.

Radwanska is hoping she can avenge that defeat — just as she turned the tables on Halep after falling to the 22-year-old Romanian in the semi-finals at Doha last month.

“I think similar to Halep, I’m looking forward to playing her and getting a little bit of revenge,” Radwanska said of her shot at Pennetta. “It’ll be a tough one.”