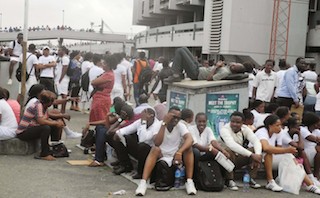 job applicants waiting at the National Stadium in Lagos

Some applicants at the Nigeria Immigration Service (NIS) recruitment exercise on Saturday in Lagos, expressed concern over the poor conduct of the exercise.

The NIS scheduled its Lagos centre aptitude test for March 15 at the National Stadium, Surulere, with thousands of applicants arriving as early as 7 a.m.

Some nursing mothers, pregnant women and persons with disabilities also came for the recruitment.

But by noon, the exercise had not taken off.

Mr Tajudeen Orelope told NAN that he submitted the online application for recruitment into the Immigration Service in 2013 and got an e-mail on Wednesday about the exams.

Orelope said that since he got to the venue, there was no arrangement on ground to attend to the applicants.

“The information we got is that the sporting exercise will start by 7 a.m. and the examination will be held by 4 p.m.

“But most of us have been here since 7 a.m. and we have all been hanging around and nobody is talking to us about what is going on,’’ Orelope said.

A nursing mother, Mrs Beatrice Uchenna, and a house wife, Mrs Emmanuella Obong, said that they left their homes in Alagbado, a Lagos suburb, since 4.30 a.m. to meet up with the scheduled 7 a.m. recruitment exercise.

“I brought my baby here thinking that before noon, the exams will be over, but up till 11a.m., nobody has attended to us or even told us our fate,’’ Uchenna said.

Obong said that she left her children at the mercy of a neighbour and she was not sure of when she would return home with the way things were going.

Another applicant, Mr James Iroha, said that he could not continue to wait as he was not sure when the examination would commence.

“I am going home because I am not sure if the examination will still hold as the crowd out here is so overwhelming.

“We have not seen any sign of commencing the exercise at all. I do not think they can accommodate all of us. This is outright suffering and I cannot stand it,’’ he said.

Miss Dolapo Akinkunmi, who said she had been unemployed for over five years, was just discharged from the hospital to participate in the exercise and return to the hospital.

“I got the message on Wednesday that the examination will be held on Saturday. My doctor refused to discharge me, but I have to beg him because I need the job desperately.

“This is already noon and we have not started. I have to go back to the hospital now before I die here because I cannot even stand the crowd and the heat of the sun,’’ she said.

An applicant, Mr Ismail Kadiri, urged the Federal Government to address the problem of unemployment in the country, saying that the turnout of applicants showed the level of unemployed Nigerians.

“I am sure that the immigration officials are overwhelmed by the crowd and do not know how to attend to us.

“That is why the whole process is being delayed. It is a signal to our government that they should do something about the unemployment rate in this country,’’ he said.

An Immigration official, who chose to be anonymous, told NAN that the recruitment exercise was being delayed due to logistics problem.

He said that the physical activities were supposed to start by 7 a.m., while the examination was fixed for 4 p.m.

Meanwhile, businesses are booming for owners of business centres and restaurants who are being patronised by the applicants