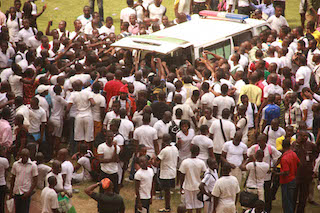 collapsed applicants being rushed to the hospital. Photo Femi Ipaye

Nigeria’s ruling Peoples Democratic Party (PDP), has called for immediate investigation of the death of some Nigerians who died during stampede at the recruitment exercise at the National Stadium, Abuja on Saturday.

The Nigeria Immigration Service (NIS) conducted the exercise simultaneously throughout the 36 states of the federation and FCT.

Mr Olisa Metuh, National Publicity Secretary of the party, made the call in a statement in Abuja. He also called on the Ministry of Interior and relevant government agencies, to immediately swing into action to unravel the remote and immediate causes of the stampede.

Metuh further urged government agencies and parastatals, as well as all PDP elected and appointed officials at all levels of government to redouble their efforts in curbing unemployment in the country.

This, the party spokesman added, was in line with President Goodluck Jonathan’s Transformation Agenda and the PDP manifesto.

He said the party was shocked and deeply saddened by the news of the untimely death of the young citizens who were at the exercise.

He said the victims were not at the venue only to secure jobs but also to be allowed the opportunity to contribute toward the development of the nation.

Metuh added that it was unfortunate and disheartening that the victims paid the supreme price while trying to be more useful to the nation.

He commiserated with the families of the deceased and prayed for the speedy recovery of the wounded. (NAN)

NAN reports that the authorities of National Hospital, Abuja, on Saturday confirmed the death of seven persons among 67,000 Nigeria Immigration Service (NIS) job applicants in the FCT.

Mr Tayo Haastrup, the spokesman for the hospital, told NAN that the dead included five women and two men adding that their bodies had been deposited at the mortuary