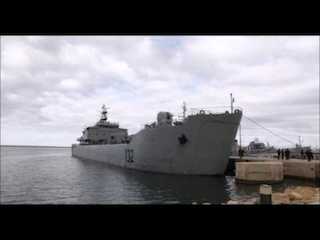 US Navy SEALs captured an oil tanker Monday that had loaded crude at a rebel-held port in eastern Libya and escaped to sea, the Pentagon said.

The weak Tripoli government’s failure to halt the tanker had plunged the country into one of its biggest crises since Moammar Gadhafi was toppled by a NATO-backed uprising in 2011, with parliament ousting Prime Minister Ali Zeidan, who fled the country.

No one was hurt when US forces, at the request of both Libya and Cyprus, “boarded and took control of the commercial tanker Morning Glory, a stateless vessel seized earlier this month by three armed Libyans,” Pentagon press secretary Rear Admiral John Kirby said.

The operation was approved by President Barack Obama and was conducted in the early hours of Monday (just after 0200 GMT) in international waters southeast of Cyprus.

The naval commandos operated from the USS Roosevelt, a guided missile destroyer which provided helicopter support, while sailors from another destroyer, the USS Stout, boarded the tanker and prepared to sail it to an unnamed port in Libya, Kirby said in a statement.

The Morning Glory last week slipped through a Libyan naval blockade of the eastern port of Al-Sidra — controlled by rebels seeking autonomy from Tripoli — after reportedly being loaded with some 234,000 barrels of crude.

Libya’s interim government confirmed the takeover of the ship and thanked the United States and Cyprus.

It said in a statement the tanker was on its way to Libya and that crew members “will be treated in accordance with national and international laws.”

“Oil is the lifeblood of the national economy and any attack on the treasures of the Libyan people is unacceptable and cannot go without a response,” it added.

Cyprus said its vessels had deployed to monitor the tanker’s course as it made its way near the Mediterranean island, remaining in international waters and eventually stopping 18 nautical miles south of the southern port city of Limassol.

The tanker did not ask for authorisation to moor in a Cypriot port, and early Monday Cypriot officials were notified that the tanker “was placed under the control of the US Navy and is being escorted by US Navy vessels on a westerly course.”

In a related development, reports in the Cypriot media said two Israelis and a Senegalese national were questioned by police in Cyprus on Saturday on suspicion of negotiating to buy crude from the tanker.

A Cyprus court declined to issue arrest warrants as authorities had no evidence that the alleged offence was committed within the island’s territorial waters.

Local media said the three flew in to Larnaca on a private jet late Friday, hired a boat and went out to the tanker to negotiate with the crew.

Police monitored their movements and the boat was intercepted once they were back in Cyprus waters. The trio flew out to Tel Aviv on Sunday night.