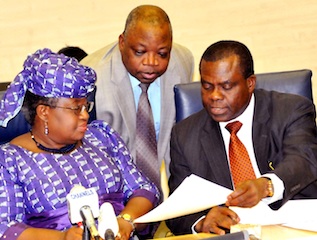 The Director General in the Budget Office of the Nigerian Federation, Dr. Bright Okogu says free education which was made available at the early stage of the nation’s education development ‘might be clearly impossible now’.

He spoke in Abuja on Tuesday at the 20th Nigerian Economic Summit with the theme “Transforming Education Through Partnership for Global Competitiveness”.

He said free education that was feasible in the past has become an impossibility now because of the increase in the number of schools and students intakes.

Nevertheless, he said education is being subsidised by government with funding rising from N189 billion in 2007 to N432.76 billion in 2013.

Okogu, who was one of the panelist on the topic ‘Funding Education: Our shared Responsibility’, said that in funding the sector considerations should be made to the number of schools and student enrolment.

He said that fewer schools and lower student enrolment prior to the 1980s made funding per head relatively higher compared with the current scenario.

The director general said also that the sector was largely financed by the public sector in the 80s, adding that at the current administration had continued to increase allocation to the sector in spite revenue challenges.

On Tuition fees and education subsidy, he said that current system of funding indicated that government was subsidising education, especially at the tertiary level.

“This subsidy in education is not rational as some people who oppose increase in tuition fee are willing to pay higher for education in private schools,” he said.

He also suggested that cost of education should be shared between government and parents, stressing that the alumni window must be used as practised in advanced countries.

He said that sustainability investment in education was critical to achieving economic development.

“Beyond funding, there is need for efficient utilisation of resources at all levels of education, need to restore discipline and administrative efficiency.

“There is need to raise the standards in the sector and have minimal political interference,” he said