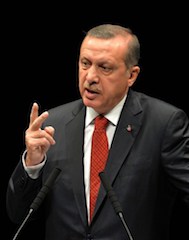 Turkish Airlines allegedly shipped weapons to unidentified groups in Nigeria, which has been ravaged by violence between the army and Boko Haram militants, a new incriminating phone call revealed on Tuesday.

The leaked conversation is the latest blow to Prime Minister Recep Tayyip Erdogan, who has been hit by a corruption probe ensnaring his key allies and a widening phone-tapping scandal.

In a tape posted on YouTube, Mehmet Karatas, an assistant executive of the airline, allegedly tells Mustafa Varank, an advisor to Erdogan, that he feels guilty over national flag carrier’s arms shipment to Nigeria.

“I do not know whether these (weapons) will kill Muslims or Christians. I feel sinful,” Karatas is allegedly heard saying.

The leaked call has the potential to harm the airline’s image — which is 49 percent state-owned and is in an aggressive push to become a global player.

It is the latest in a series of recordings implicating Erdogan and his aides in corruption and other abuses of power ahead of crucial local polls on March 30.

The Turkish strongman has dismissed most of the tapes as “vile” fakes put together by rivals.