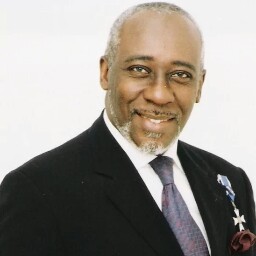 Ex-Diplomat and ace compere, Olufemi Segun is dead. He was aged 55.

P.M.NEWS learnt that Segun, son of Mrs Mabel Segun, a renowned novelist, died today after sustaining a terrible injury in an accident on his power bike around Lekki Phase 1, Lagos.

Yeni Kuti, daughter of late Afrobeat legend, Fela Anikulapo Kuti, and the deceased former wife, confirmed the passage of the ace broadcaster in a telephone chat with our correspondent.

“It’s so sad. Femi died after having a terrible accident on his power bike,” Yeni told P.M.NEWS.

Segun and Yeni were once married and they both have a daughter, Rolari, in her mid-20s now.

Segun, born in 1959, was a holder of a Masters degree in International Relations and Strategic Studies. He attended numerous training Courses in Diplomacy, Government, Banking and Public Relations.

He was a polyglot, fluent in French, Portuguese and German and had a working knowledge of Spanish, Italian, Ibo and Hausa languages.

As a Diplomat between 1983 and 1990, Segun served as a Foreign Affairs Officer on Secondment to The Presidency, Lagos as Official Portuguese Interpreter to three former Heads of State.

In the course of his diplomatic duty, he was honoured with the Officer of the Order of Rio Branco, Brazil by President Joao Bernado Figueiredo in 1983.

From 1990 to 1994, he worked with Oceanic Bank, and was pioneer Manager of its Abuja Branch. He also served as President of the Bank’s Staff Club.

Segun was involved in several Church and NGO volunteering activities. He served on the Boards of several NGOs.

He was a two-time Senatorial Candidate in Lagos State.

He was a lover of power bike on which he was regularly seen traveling on for many years. A classmate of his, Ade Ibirogba said he had a power bike as a student in the University of Ife, over 30 years ago.

Sadly he lost his life while riding the machine.

Until his death, Segun was the National Publicity Secretary of Igbobi College Old Boys Association.