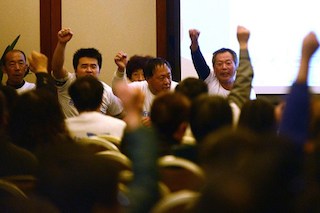 Angry Chinese relatives of passengers from the missing Malaysia Airlines flight MH370 raise their arms in protest during a press conference at the Metro Park Lido Hotel, after a meeting with Malaysian officials in Beijing on March 22, 2014.

Police were forced to intervene on Saturday as relatives of Chinese passengers aboard vanished Flight MH370 rushed towards Malaysian officials at a Beijing hotel, demanding answers over the fate of their loved ones.

The confrontation at the Lido Hotel came as the search for the missing jet entered its third week, with many clinging to the hope that family members might still be alive and alleging Malaysian involvement in a cover-up.

A total of 153 Chinese were on board the Beijing-bound Malaysia Airlines Boeing 777 that disappeared from civilian radar screens on March 8, nearly an hour after taking off from Kuala Lumpur. The plane was carrying 239 passengers and crew.

“Government of Malaysia, tell us the truth! Give us back our loved ones!” shouted audience members at Saturday’s briefing at the hotel attended by government officials. The hotel has hosted daily briefings for relatives from representatives of the airline.

As anger in the hall mounted, some relatives rushed towards the Malaysian officials but police intervened and the officials left the room.

“We can’t bear it any longer,” one woman said. “They’re offering us compensation, but we’ve lost our entire families. This is China. They can’t just tell us to come or go as they please. We’re going to wait here. If they don’t come, we’re not leaving.”

Dozens of countries have been involved in the search for the missing plane but the lack of firm answers from airline officials has undermined the relatives’ confidence in the hunt for the jet.

On Friday, a first meeting was organised between the passengers’ families and Malaysian government officials. That meeting also resulted in heated exchanges, boos and eruptions of anger.

Six planes, including four Orion anti-submarine aircraft packed with state-of-the-art surveillance equipment, joined the search for debris from the aircraft over a remote stretch of the Indian Ocean, 2,500 kilometres (1,500 miles) southwest of Perth on Saturday.

Chinese, British and Australian naval ships were all steaming to the same area where two floating objects — possibly plane wreckage — were picked out on grainy satellite pictures.