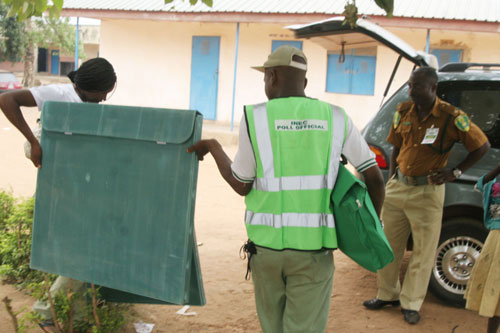 The Nasarawa State Independent Electoral Commission (NASIEC) has released the results of Saturday’s local government elections, with the PDP winning in four of the state’s 13 local government areas (LGAs).

Chairman of the commission, Dr. Abdullahi Moddibo, who briefed newsmen on Sunday in Lafia, said the elections were however inconclusive in three LGAs.

He explained that the commission did not have the legal authority to announce results of the elections at its headquarters in Lafia.

The chairman said however that he was only giving out the results which were submitted to the commission by the Returning Officers from the LGAs.

He said the PDP won the chairmanship election in Kokona, Keffi, Keana, and Nasarawa Eggon LGAs.

Moddibo said the All Progressive Congress (APC) won the chairmanship poll in Lafia, Doma, Karu, Toto, Awe and Wamba LGAs, while elections were inconclusive in Akwanga, Obi and Nasarawa LGAs.

“The Akwanga LGA result was declared inconclusive, owing to the fact that results from the four wards of Andaha, Gudi, Akwanga-West and Akwanga-East were still pending.

“The four affected wards in Akwanga have a voting strength of over 30,000. Therefore, there will be no justification in declaring a winner without the results from those wards.

“In the case of Nasarawa LGA, Returning Officers for six electoral wards absconded, thereby leaving the commission with no option than to declare the election inconclusive.

“In Obi LGA, elections are still pending in three wards, and fresh elections will be conducted in the affected wards,’’ he said