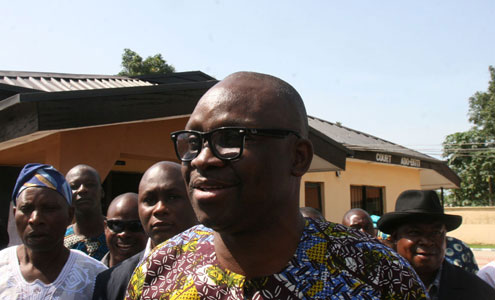 The National Working Committee (NWC) of the PDP, on Wednesday approved the election of Mr Ayo Fayose as the party`s candidate for the 21 June Ekiti State governorship election.

Mr Olisa Metuh, the party`s National Publicity Secretary in a statement said the NWC approved the nomination of Fayose after a thorough consideration of the report of the Ekiti State Governorship Primary Electoral Committee.

“The NWC approved the result and upheld the nomination of Fayose as the candidate of the PDP for the June 2014 governorship election in Ekiti state.’’ he added.

The NWC commended the committee for the conduct of a peaceful and transparent exercise and urged all PDP members in the state, including the other aspirants, to support the party`s candidate.

This, it said, was critical to ensure that the party had a successful outing at the governorship election.

Fayose contested the party primary on March 22 with 13 other aspirants.

He was announced winner of the election by Dr Peter Odili, former Governor of Rivers state and the leader of the five-man panel from the party`s headquarters.

Fayose, a former Governor of Ekiti state, emerged winner of the primary with 462 votes out of the 544 accredited delegates.

Ninety-seven delegates were said to have been absent while 477 ballot papers were utilised and four were voided.

The Ekiti PDP primary election was said to have been observed by INEC Resident Electoral Commissioner in the State, security agents and other election observers.