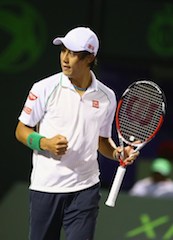 A left groin injury forced Japan’s Kei Nishikori to withdraw from the ATP Miami Masters, shortly before he was to meet world number two Novak Djokovic in the semi-finals.

The injury ended Nishikori’s sparkling run at the hardcourt tournament — where he beat world number five David Ferrer and Swiss great Roger Federer in the fourth round and quarter-finals.

It also throws into doubt Nishikori’s participation in Japan’s Davis Cup World Group quarter-final clash with holders Czech Republic, to be held in Tokyo from April 4-6.

“I don’t know if I can play or not,” Nishikori said of Japan’s first Davis Cup quarter-final tie under the tournament’s modern format. “I will try.”

“Very sorry to say that I have to pull out today,” he said. “Very disappointed and I am obviously very sorry for any fans that wanted to come out for this match.”

The 24-year-old Japanese player rallied from a set down to upset Federer 3-6, 7-5, 6-4 on Wednesday night to reach the second Masters semi-final of his career.

“For me it was my biggest tournament in a couple of years, to reach a semi-final of a Masters,” a dejected Nishikori said in a hastily convened press conference. “It’s really sad. I was really playing well.”

His withdrawal gave Djokovic a walkover into Sunday’s final, where he’ll face either world number one Rafael Nadal or Czech Tomas Berdych.

Nishikori said the injury troubled him in the match against Federer, but he had in fact been dealing with discomfort from it for a month — at both Indian Wells and in the tournament at Delray Beach, Florida, before that.

When he went for his morning warm-up on Friday, he realized he just couldn’t move adequately.

“I couldn’t move from side to side,” he said.

Nishikori said he didn’t think the injury was “surgery bad” but he planned to head home to Japan as soon as possible to seek medical treatment.

It was a disappointing end to the campaign for Nishikori, who was the first Asian player since Thailand’s Paradorn Srichaphan in 2003 to reach the Miami semi-finals.

“I will work with my medical team to be back healthy as soon as possible,” he said in a statement on his Facebook page.