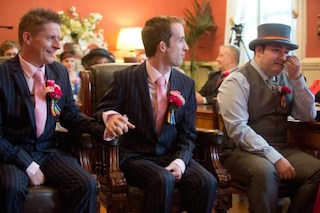 Gay couples across England and Wales said “I do” on Friday night as a law authorising same-sex marriage came into effect at midnight, the final stage in a long fight for equality.

Prime Minister David Cameron hailed what he said was an “important moment for our country”, and a rainbow flag flew above government offices in London in celebration.

In Brighton on England’s south coast, Neil Allard and Andrew Wale exchanged vows and rings in the opulent splendour of the Royal Pavilion in front of about 100 guests.

Wearing velvet-collared three-piece suits with white flowers in their buttonholes, the smiling couple of seven years hugged and kissed after they became “husband and husband”.

They were among several couples bidding to be first to take advantage of last year’s Marriage (Same Sex Couples) Act by holding midnight weddings.

Emerging out into the crisp night air after the ceremony, they were stunned to be greeted by hundreds of cheering supporters.

To calls of “speech, speech!”, they expressed hope that the change in Britain would help bring equality to same-sex relationships in other countries.

Earlier this week, Wale remarked “how lucky we are to live in a comparatively tolerant part of the world”.

Civil partnerships have been legal since 2005 and marriage brings no new rights — the ability to adopt, for example, was introduced in 2002.

But campaigners have insisted that only the right to marry gives them full equality with heterosexual couples.

“We didn’t want to get married until it was a marriage that my mum and dad could have,” said Teresa Millward, 37, who will wed her her long-term girlfriend on Saturday.

The gay marriage law is the final victory in a long battle stretching back to the decriminalisation of homosexuality in England in 1967.

Cameron backed the change despite strong opposition from members of his Conservative party and the established Church of England.

“This weekend is an important moment for our country,” the prime minister wrote in an article for Pink News.

“Put simply, in Britain it will no longer matter whether you are straight or gay — the state will recognise your relationship as equal.”