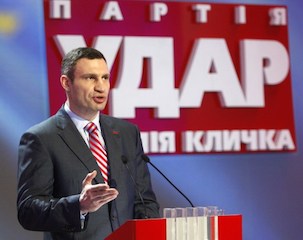 Boxer turned opposition leader Vitali Klitschko on Saturday dropped out of Ukraine’s snap presidential polls to help the candidacy of a charismatic tycoon who made a fortune selling chocolates and backs closer Western ties.

The towering sports star’s decision leaves the crisis-hit nation of 46 million with two clear frontrunners in the May 25 vote — business baron Petro Poroshenko and the highly divisive and corruption-stained opposition leader Yulia Tymoshenko.

The 42-year-old Klitschko conceded to fellow members of his aptly-named UDAR (Punch) party that he had slipped badly in public approval ratings in the tumultuous weeks following the February 22 ouster of pro-Kremlin president Viktor Yanukovych.

“We have to nominate a single candidate representing the democratic forces,” Klitschko told an UDAR party congress.

“This has to be a candidate who enjoys the strongest public support. Today, this candidate in my opinion is Petro Poroshenko.”

Klitschko added that he planned to run for mayor of Kiev in elections that will be held alongside the presidential polls.

The former heavyweight champion — a proponent of closer European ties who was stripped of his title belt in December for spending too much time at the barricades instead of the boxing ring — is a national hero in his home country who now leads the third-largest party in parliament.

Klitschko was viewed as the most potent political threat to Yanukovych at the height of the protests and enjoyed the support of more than 20 percent of potential voters in late December.

But a survey published by four respected Ukrainian research firms this week put him second in the presidential ratings with less than nine percent of the vote.

Poroshenko — the only prominent Ukrainian tycoon to join protesters at the Kiev barricades — ranked first with the backing of almost a quarter of the respondents.

Some analysts believe that support for Klitschko subsided once Yanukovych left power as voters began to look for other candidates with similar pro-Western leanings but who had more experience in politics and administrative affairs.

Poroshenko — who had travelled to London with Klitschko on Thursday for talks with British Prime Minister David Cameron and Foreign Secretary William Hague — attended Saturday’s UDAR part congress after formally declaring his candidacy on Friday.

Poroshenko is often referred to as the “chocolate baron” because of the huge popularity in Eastern Europe of his Roshen sweets brand.

Roshen ran into trouble in Russia as soon as Poroshenko started publically backing a trade and political association agreement with the European Union that would have pulled Ukraine out of the Kremlin’s orbit and closer into the Western fold.

Yanukovych sparked the protests against his rule by rejecting the deal. The new interim leaders in Kiev signed the political portion of the pact this month.

Moscow authorities banned Poroshenko’s chocolates for alleged health violations and one of his Russian factories had to halt production on the same grounds.