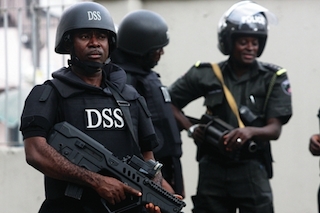 Nigeria’s secret police said on Sunday that 21 detainees died during an attempted escape from custody at its headquarters, with unconfirmed reports that Boko Haram militants were involved.

A security breach at the facility in Abuja, particularly by the feared Islamists, would be an embarrassment for the government and raise fresh questions about its ability to tackle the extremists.

But there was no official confirmation of the involvement of the group, which has been waging an increasingly violent insurgency in Nigeria’s northeast this year.

Marilyn Ogar, spokeswoman for the Department of State Services (DSS) — Nigeria’s domestic intelligence agency — said only that detainees had died during the attempt.

“It has been established that 18 casualties were recorded, while two service personnel sustained serious injuries,” she said in an emailed statement.

“Three other detainees who sustained gunshot injuries during the incident have also died. Meanwhile, (an) investigation is still ongoing to ascertain the immediate and remote causes.”

– Fears of outside help –

Ogar had said earlier that the incident happened at 7:15 am (0615 GMT) when one of its officers went to give the detainees food.

“One of the suspects attempted to disarm him by hitting him at the back of his head with his handcuff,” she said.

“His attempt to escape drew the attention of other guards at the facility who fired some shots to warn and deter others.”

No details were provided on the number of inmates involved nor the reason for their detention. There was no explanation either about how exactly the 21 died.

But Ogar indicated they acted in case the detainees had outside help, as roads leading to the compound were cordoned off “to prevent possible assistance from external collaborators”.

The DSS headquarters are near the presidential villa and nearby residents reported hearing gunfire on Sunday morning.

President Goodluck Jonathan’s spokesman, Reuben Abati, had downplayed the incident, writing on Twitter that the head of state’s residence was not affected and there was “no cause for alarm”.

“What happened at the SSS HQs has nothing to do with the (Presidential) Villa. President Jonathan is safe & well. Thank you for your concern & support,” he added.

The attempted break-out, especially if Boko Haram suspects were involved, will do little to instil confidence in the government’s security operations.

The government has previously been criticised for relying too heavily on conventional military means to tackling an enemy fighting a guerrilla war.

Many users of social media initially believed the presidency was under attack, given its proximity to the intelligence agency.

Nigeria’s military was brought in to secure the area surrounding the headquarters, which is known locally as Yellow House, and conduct searches.

“Normalcy has returned to the area as the roads have been opened for free movement of persons and vehicles,” said Ogar.

A security source told AFP the officer involved was shot with his own rifle after the inmates seized the weapon.

A number of Nigerian newspaper websites and users of social media claimed that the detainees were Boko Haram suspects but did not quote sources.

The DSS had on March 3 paraded seven suspected Boko Haram members arrested on suspicion of killing a prominent Muslim cleric who had criticised the group before the media at their headquarters.

The seven were held over the murder of Adam Albani in the northern city of Zaria on February 1.

But it was not known whether the men, including the alleged mastermind of the attack and one of the gunmen, were still at the facility.

The Boko Haram insurgency has been raging since 2009 but has turned increasingly violent in the first three months of this year.

During that period, more than 1,000 people have been killed and some 250,000 displaced in the three northeastern states worst affected by the violence, according to agencies tracking the conflict.