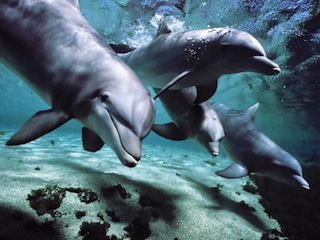 Russian state media has said that Crimea dolphins will join Russia, although not by referendum. Instead, a Soviet-era military program training dolphins and seals for combat will be revived in Crimea after its annexation by Russia.
The so-called combat dolphins will be re-trained, re-equipped and deployed battle-ready to the Russian Navy, an employee at the aquarium in Sevastopol told Voice Of Russia.
As Russian passports are distributed to Crimea residents, state news agency Rio Novosti pointed out that even the dolphins would have to adopt a new nationality. “The dolphins themselves have now become Russian.”
Crimea’s dolphins were first trained to plant explosives and locate mines in a Soviet Union military program at the Sevastopol aquarium in the 1960s, according to The Moscow Times. The newspaper wrote that although their exploits remains a doubt. “Whether they actually engaged in military activity is disputed but the dolphins were later used to locate lost military and scientific equipment.”
When the Soviet Union collapsed in 1991, and Crimea became an autonomous republic under the sovereignty of newly-independent Ukraine, the dolphins were retired. The aquarium was repurposed for civilian use, including activities for children with disabilities Ria Novosti said.
But since Russian troops ousted Ukrainian forces in Crimea and seized their ships and military bases, Russia incorporated the peninsula as part of the country, a move denounced as illegal by Ukraine.
In 2012, Russian news outlets reported that the Ukrainian military had put the combat dolphins back on duty, but the Ukrainian defense ministry denied the reports.
Dolphins’ powerful underwater sonar capabilities brought them to the attention of both the United States and Soviet Navies during the Cold War. From the 1960s, U.S. Navy dolphins were trained to deliver equipment and retrieve objects underwater, as well as to hold a camera in their mouths for underwater spying, according to PBS. The BBC reported that the US program, classified until 1992, has been scaled back as the dolphins are increasingly replaced by robots.