Another foreign student murdered in Brisbane 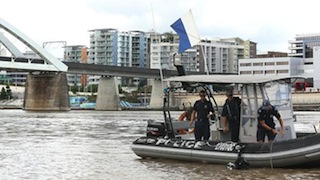 Police divers search for evidence at the scene of murder

A Frenchwoman has become the fourth foreign student to be brutally murdered in the Australian city of Brisbane in almost as many months, police said.

The battered and naked body of Sophie Collombet, a 21-year-old exchange student was found at the Kurilpa park near her apartment after what police called “a brutal attack” in the early hours of Friday morning.

“We believe the cause of death is a brain injury from blunt trauma. It’s a particularly aggressive attack,” Detective Inspector Rod Kemp said. But no one has been arrested.

The exchange student’s killing follows the stabbing to death of Singaporean Meena Narayanan in the city last week.

Just months before South Korean student Eunji Ban, 23, was found battered to death in a Brisbane park and weeks later the body of another South Korean, Min Tae Kim, 28, was discovered in a shallow grave in a backyard.

There is no suggestion any of the deaths are linked, but Kemp said the spate of killings was a real worry. “We are a safe society, I believe. But now this is the (fourth) international student (to be killed), and of course it’s a concern to us.”

Police said they were falling victim simply through being in wrong place at the wrong time. Last year 30 people were murdered in Brisbane.

Campbell Newman, Queensland state Premier insisted visitors from overseas had nothing to fear. “I believe it is safe not only for international students, but for Brisbane students. Thankfully they found offenders in those other situations,” he said.