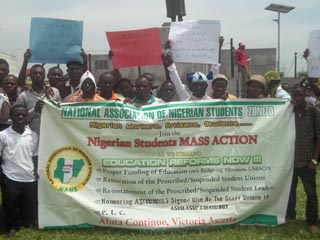 Students protesting in Lagos Monday against the continuing strike by ASUP

Some concerned parents in Abakaliki have appealed to the Federal Government to end the protracted strike by the academic staff of polytechnics and colleges of education.

The parents, who made the appeal in separate interviews with the News Agency of Nigeria (NAN) in Abakaliki on Tuesday, expressed sadness that it had lingered for too long, included Mr Paulinus Okoro, Eugene Okpara, Donatus Igboji and Mrs Dorothy Onwe.

They noted that the patience of parents whose children and wards were in the different institutions, had been overstretched and urged the government to end the strike.

“My daughter is in Federal Poly, Oko and has spent over nine months at home waiting on ASUP to call off the strike.

“The lingering strike has impacted negatively on the future of the students in these tertiary institutions.

“I appeal to the Federal Government to act fast to end the strike in the interest of our children,” one of the respondents, Mr Paulinus Okoro, said.

On his part, Mr Eugene Okpara appealed to President Goodluck Jonathan to intervene and bring the strike to an end.

“If the government does not pay attention to polytechnic and teacher education, how do we realise our dream of becoming an industrialised nation?” Okpara asked.

The lecturers embarked on the strike in 2013.