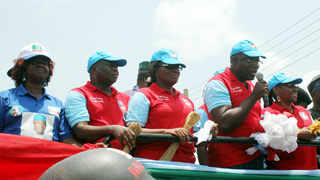 Ekiti State Governor, Dr. Kayode Fayemi says his administration has been able to attract God’s blessings and approval because of its respect for the traditional institution and elders.

Speaking in Ijelu in Oye Local Government during his re-election campaign, which entered day 2 on Thursday, Fayemi said rather than desecrate the traditional institution as was once witnessed in the state, his administration had instead elevated the social status and the well-being of the monarchs through various perks, some of which are the health outreach to palaces and the brand new cars distributed to all of them.

“We are going to win, we are a successful government. We are not chased away on account of electoral fraud or state-sponsored terrorism. We don’t lock up traditional rulers in the boot of cars, and we don’t treat our elders with disrespect.

“We take care of our elders by giving them social security stipends every month. We also gave brand new cars to our traditional rulers and we are not a government of abandoned projects,” the governor said.

Fayemi added that of all the requests presented to his administration by the Ijelu community, the only one yet to be granted is the Ijelu/Itapa road which has also been incorporated into the 2014 budget and would be done before December.

In Omu, the governor urged all eligible voters in the state who are yet to obtain their permanent voter’s cards to do so at the INEC office in their respective local government areas.

Addressing his supporters in the town, Fayemi said the voter’s card remains the greatest weapon with which they could engender the continuation of good governance in the state.

Fayemi, who paid a courtesy call on traditional rulers in all communities visited, noted that his government was able to bring change to all the communities in the state because it never discriminated.

The governor listed the projects executed by his government in Omu to include school renovation, 3.6km Omu/Ilemeso road, Ifon/Abudo/Temidire Street road and the renovation of open market stall.

Among those who welcomed the governor at Itapa-Ekiti were some of the 70 beneficiaries of the monthly stipend for elderly persons.

They thanked the governor for his love for elderly people and prayed that God would give him long life and victory over his opponents.

Scores of members of the Labour Party in the town defected to the APC, saying Fayemi’s outstanding performance was what attracted them to the APC

Other towns visited by the campaign train included Osin, Ilupeju and Ire.

In all the towns visited, the people rolled out the drums to welcome the governor with dancing and singing.

Those who joined the governor on the campaign train included the Deputy Governor, Professor Dupe Adelabu; Ekiti APC Chairman, Chief Jide Awe; the Director-General of the Kayode Fayemi Campaign Organisation, Bimbo Daramola; Secretary to the State Government, Dr. Granite Owolabi; commissioners, Chief of Staff to the Governor, Mr. Yemi Adaramodu, amongst others.