I will be a grandfather soon - President Jonathan 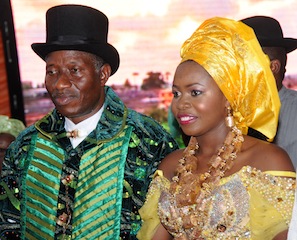 PRESIDENT GOODLUCK JONATHAN AND HIS DAUGHTER, FAITH AT HER TRADITIONAL WEDDING IN OTUOKE IN BAYELSA STATE

President Goodluck Jonathan has said he would soon be  a grandfather.

“People that saw me today didn’t recognise me. I am preparing to be a grandfather,” he said jocoseriously.

Jonathan was speaking at the traditional wedding of his daughter, Faith to her heartthrob,  Godswill Edwards in Otuoke, Bayelsa state today. The power marriage which attracted many dignitaries from across Nigeria has been lauded by many people.

The president however used the opportunity to urge couples in Nigeria to love and endure each other. “Endurance is the ingredient for marriage; for any marriage to last endurance is key, ‘he said.

He expressed his appreciation to all the dignitaries who attended the marriage and described the ceremony as a painful joy that could not be avoided. “It is a painful joy; my wife and I are happy and we appreciate you for witnessing the marriage of our daughter.”

Vice-President Namadi Sambo, who chaired the occasion, advised the couple to be tolerant, friendly, and obedient to the marriage institution. Many dignitaries including governors, ministers, captains of industries attended the marriage.

“For the couple, who have married today, I prayed that God’s blessing shall continue to manifest in your union; learn to be each other’s companion and friend. I congratulate you and President Goodluck Jonathan for this colourful occasion,” he said.

Also speaking at the ceremony was Governor Liyel Imoke of Cross River who described inter-state marriage as an avenue “to extend good fortunes to states, communities and villages in the country.’’

He thanked President Goodluck Jonathan for giving his daughter to the son of a royal father from Cross River state  and promised that the people of the state would take good care of her.

His Bayelsa state counterpart, Governor Seriake Dickson of Bayelsa expressed gratitude to dignitaries who graced the occasion and prayed that God should grant the couple fruitful marriage.