Leverkusen sack Hyypia after another defeat 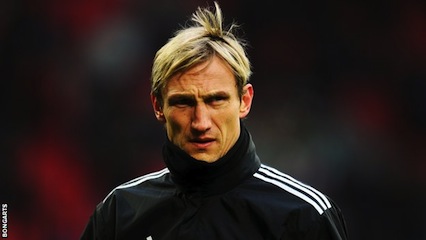 Bayer Leverkusen has sacked coach Sami Hyypia after their 2-1 defeat to strugglers Hamburg left them with just one win in their last 11 games and facing a battle to qualify for next season’s Champions League.

The 40-year-old former Liverpool captain, who took on his first senior coaching role last August, has been replaced by Sascha Lewandowski, head coach of Leverkusen’s junior side.

The defeat at Hamburg yesterday leaves Leverkusen in fourth place, the last Champions League spot, but they can be overtaken by Wolfsburg who face second-placed Borussia Dortmund on today.

“After careful consideration and in light of the ongoing crisis, we have concluded that only a change in the team management can bring about the much-needed shift,” said Bayer’s managing director Michael Schade.

“I thank Sami Hyypia expressly for his dedicated work over the past years. As a player and coach, he has been outstanding for us and a large part of the success in recent years has been down to him.

“But now we have arrived at a point where we unfortunately see no other way to turn things around.”

Hypia, a former Finland international, retired as a player in 2011 after two seasons at Leverkusen and having spent a decade at Liverpool.

But having steered Leverkusen to the last 16 of the Champions League, Bayer were crushed by Paris Saint-Germain in the last 16 in February and have endured a horror run of results.

They have crashed out of the German Cup and dropped from second in the Bundesliga to fourth.
Lewandowski is back involved with Leverkusen’s top team having been joint coach of the senior side with Hyypia last season.

“It’s not an easy situation for me now to take Sami’s place,” said Lewandowski who has five games to make sure Leverkusen finish in the top four.

“For more than a year, we jointly carried the responsibility for the team. I take over from him with some regret that his ideas could not be realised, but as an employee of the club, I have a responsibility to meet the requirements of my current job.

“We’ll do everything to bring this season to a successful end.”