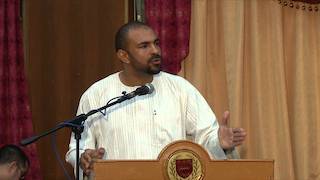 Nurudeen Lemu, the son of prominent Islamic cleric, Dr. Sheikh Ahmed Lemu, a former Grand Khadi of Niger State and erstwhile Chief Judge of Shariah Court of Appeal, caused a stir at the ongoing national conference with his assertion that God Almighty is neither a religious nor ethnic bigot and that the problem with Nigerians is that both Muslims and Christians always over-estimate their virtues while down-playing the goodness in others.

Lemu who is a delegate on the platform of the Supreme Council for Islamic Affairs also condemned the murdering and the murderers of Christians and Muslims in the country under the cover of religion.

“One tendency for people who claim to follow a religion is to slide into the position of believing that they are better than the others. We over-estimate our virtues and under-estimate the goodness in others.

“The tendency is for us to be spiritually arrogant and forget that others are people like us. And if you are in other person’s position, you probably will be like someone else.

“There is no compulsion in religion. We all own Nigeria. We all belong here. And we all have rights to self determination. We should respect that right and do onto others what we will do onto ourselves.

“Every ethnic group is an oppressed minority somewhere. Every majority or settlers is an indigene somewhere. In one way or the other, we are all settlers.

“We just don’t remember where we came from and why we came. But ultimately, we are all visitors to this planet; from God we came and to Him we will return.

“I pray that at the end of this conference, we will all grow in our humanity and respect for each other,” Lemu said.

He spoke at the session on Monday.