Family Of 4, Others Electrocuted 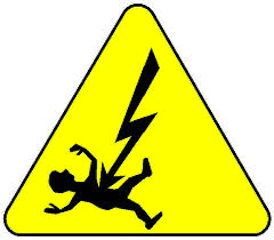 A fallen high tension wire has electrocuted six people in Oworonshoki area of Lagos, southwest Nigeria. The incident happened in the early hours of today while it was raining.

The tragedy occurred at Onabanjo Street, Oworonshoki around 2.00am. It was gathered that the high tension wire cut into two as a result of the heavy rain.

Mr. Kabiawu Babajide, General Secretary, Council of Oworonshoki Youth Forum said the high tension wire cut and fell across a drainage channel and caught fire when it came in contact with wood, adding that two vehicles parked beside the wood were burnt by the fire ignited by the wood.

The incident occurred in front of houses on number 6 to 10 on the street. While the fire that burnt the vehicles was raging, residents raise the alarm for others to escape from the scene.

The victims who were electrocuted did not know what was happening when they ran out of their houses ran in a bid to escape and stepped on the naked wire.

Others who were injured were rushed to the hospital.

According to Babajide, “people ran away from their houses in different directions and stepped on the high tension wire and they were immediately electrocuted. It was about 30 minutes later that electricity supply was cut off after the tragedy had occurred.”

He said among the six people who died were a woman with her three children and another pregnant woman with a child.

Anothee eye witness, Ladi Joshua said he was few metres away from the scene where the high tension wire cut into two.

He said when the wire fell on a wooden material and caught fire, he called the fire service to the scene but that before they came, the damage had been done.

He also said six people were electrocuted, while those injured were taken to the hospital.

Another drama played out at the scene as the husband of the woman said to have lost his wife and three children drank poison and had been rushed to Afolabi Hospital in the area.

According to him, the deceased were taken to the mortuary of a hospital in Yaba as they were rejected at the Gbagada General Hospital.

General Manager, Lagos State Emergency Management Agency, LASEMA, Dr. Femi Oke-Osanyintolu, when contacted said he was aware of the incident but that they were still investigating and would get back to us.

He said those who died included two female, including a pregnant woman and three teenagers, saying that the fire was prevented from spreading to nearby buildings.