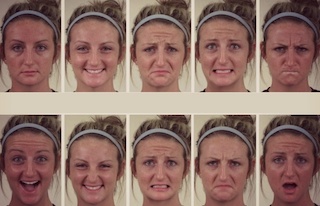 U.S. researchers said they have identified 21 distinct facial expressions that could be used to track the origins of emotions in the human brain.

“Our work suggests there are at least 21. It is however possible we will identify other emotion categories,” Martinez said.

The scientist and his doctoral students, Shichuan Du and Yong Tao, were able to expand the library of expressions by combining elements of the six basic expressions to create “compound expressions’’ such as “happily surprised’’ or “fearfully disgusted.’’

The findings, published in the U.S. journal, Proceedings of the National Academy of Sciences, showed that people may express a broader range of emotions via uniquely identifiable facial expressions than previously thought.

In the study, the team photographed 230 volunteers, 130 females, 100 males and mostly college students, each making faces in response to verbal cues such as “you just got some great unexpected news as “happily surprised’’ or “you smell a bad odour’’ as “disgusted.’’

In the resulting 5,000 images, they painstakingly tagged prominent landmarks for facial muscles, such as the corners of the mouth or the outer edge of the eyebrow.

According to the research to determine whether the expressions are unique enough to be distinguished from others, the team analysed each expression with a Facial Action Coding System (FACS).

It is a standard tool in body language analysis that can identify which facial muscle groups are used to create expressions, the research said..


The FACS analysis revealed that the 21 expressions used a unique combination of muscles that was different from all other expressions.

For example, the expression for happy is nearly universal: 99 per cent of the time, study participants expressed happiness by drawing up the cheeks and stretching the mouth in a smile.

The research also said that surprise was also easily detected: 92 per cent of the time, surprised participants opened their eyes wide and dropped their mouth open.

“Happily surprised” turned out to be a compound of the expressions for “happy” and “surprised.”

About 93 per cent of the time, the participants expressed it the same way: with the wide- open eyes of surprise and the raised cheeks of happiness and a mouth that was a hybrid of the two, both open and stretched into a smile.

“This research suggests that our cognitive system uses at least 21 emotion categories to process internal thought and interpret internal and external input,”Martinez said.

“Research on emotion should use these 21 categories, for example, to better understand psychopathologies, where emotion processing deviates from the general population, sometimes resulting in traumatic behaviour as in PTSD (post-traumatic stress disorder),” the research.