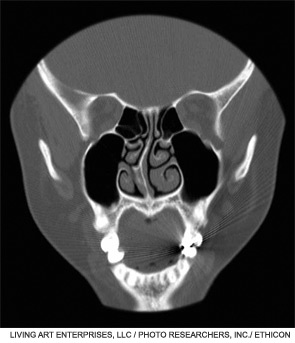 Surgeons in Switzerland on Friday said they had carried out the first-ever operations to repair cancer-ravaged noses using tissue grown from the patient’s own cartilage cells.

The technique involves reconstructing the so-called alar wings of the nose — the nostrils — after removal because of skin cancer.

At present, surgeons replace the “wings” with cartilage grafts taken from the ear, nasal septum or rib, which is an additional and often painful operation for the patient.

They got the cells to multiply using a growth factor chemical and “seeded” them onto membranes made out of pig collagen, where the cells grew for a further two weeks.

Shaped according to the nose area they were destined to replace, the engineered grafts were then stitched in place and covered with a conventional skin graft.

In an assessment a year later, the implant was found to be stable and all the patients said they were happy with their appearance and ability to breathe.

“This new technique could help the body accept the new tissue more easily and improve the stability and functionality of the nostril.”

The study appears in the medical journal The Lancet, along with an update on another pioneering feat in tissue engineering.

Eight years ago, four teenagers underwent revolutionary treatment to correct Mayer-Rokitansky-Kuester-Hauser syndrome, a rare disorder that causes the vagina to be underdeveloped or absent.

Researchers in the United States and Mexico, using a sample of vulvular tissue from each patient, grew smooth muscle cells and vaginal lining cells on vagina-shaped scaffolds.

The long-term results of the implants are excellent, The Lancet reported.

The engineered vaginas grew as the girls grew and have a normal vaginal wall. The recipients are sexually active, report no pain and are satisfied with their sexual desire, lubrication and orgasm, it said.