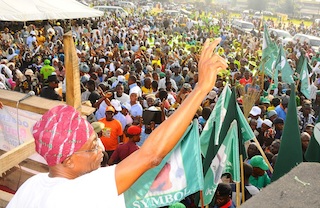 Governor Rauf Aregbesola of the state of Osun was returned unopposed in the All Progressives Congress’ (APC) governorship primary in the state. He will now face on 9 August, Senator Iyiola Omisore, who on 5 April picked the Peoples Democratic ticket as its torch bearer.

Though there was no challenger for Aregbesola, the APC conducted an election in all the wards in the state.

Malam Nasir el-Rufai, the Chief Returning Officer of the Planning Committee of the primary, announced Aregbesola as the winner in Osogbo on Saturday.


El-Rufai said “about 355,729 members registered for the party and 269,631 came out to vote with their membership voter cards for the primary.’’

He said the primary was smooth and well organised in all the 332 wards in the state.
ction.

He urged the people of Osun to come out en masse on Aug. 9 to vote for him and urged them to ensure that their votes counted.

The governor restated his readiness to serve the people for another four years in order to complete ongoing projects.