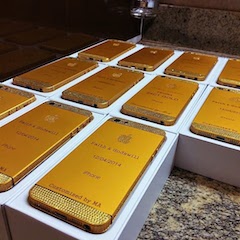 The two-leg wedding of President Goodluck Jonathan’s daughter, Faith and Godswill Edward, son of Cross River State monarch ended yesterday in Abuja, leaving on its trail a dust of controversy.

At the first leg in Otuoke, Bayelsa state, bloggers reported that the couple was given 80 cars as wedding gift.

Then yesterday at the reception in Abuja, guests went away with the gift below.

The iphone pieces are replicas of the 53 Aso Rock was accused to have ordered last year to mark Nigeria’s independence anniversary at a cost of N662 million. Each one then was said to have cost bewteen 3,000 pounds and 50,000 pounds.

P.M.NEWS could not confirm the cost of the wedding gift.