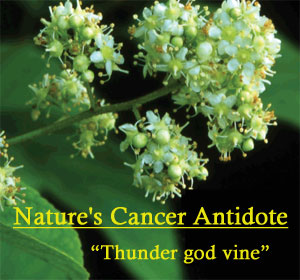 The herb has long been used in China to treat this potentially crippling auto-immune disease, which typically strikes hand and foot joints.

It is known in Mandarin as lei gong teng and to botanists as Tripterygium wilfordii Hook F.

Extracts of the herb have already fired the interest of drug laboratories as they contain hundreds of compounds, including intriguing molecules called diterpenoids which are believed to ease inflammation and immune response.

In a study published in the British journal BMJ Open, Chinese researchers recruited 207 patients with rheumatoid arthritis and gave them either the herb; the drug methotrexate (marketed as Rheumatrex or Trexall); or a combination of the two.

After six months, the patients were given a doctor’s assessment and were also asked if they felt any change.

The benchmark for improvement is called the ACR 50 — named after the American College of Rheumatology — which indicates a 50-percent improvement in the tally of tender or swollen joints and other criteria such as pain and disability.

Of the 174 who completed the trial, 55 percent of those on the herb attained ACR 50, compared to 46 among those treated with methotrexate alone.

But the biggest gain was among the group which took the herb-methotrexate combination: nearly 77 percent of them achieved the ACR 50 measure of improvement.

Previous — but small-scale — trials involving thunder god vine have found it scored well against a harmless lookalike called a placebo and an anti-inflammatory called sulfasalazine.

But some of that research also flagged potential side effects from the herb.

The new study said that side effects this time were roughly similar among the herb and methodrexate users, being mainly gastrointestinal upsets. Among the herb group, some of the women experienced irregular menstruation.

The investigation, led by Xuan Zhang, a rheumatologist at the Peking Union Medical College Hospital in Beijing, acknowledged several limitations.

One was that the doctors who treated the patients, and the patients themselves, knew what medication was being taken, although outside assessors were brought in to verify the results.

Another was that the trial was too short to see if the herb arrested progression of the disease rather than eased the symptoms.

A third was that the dose of methotrexate was limited to 12.5 milligrams a week. “This is standard in Asia, although it is common in the West to use higher doses,” the paper said.