20 Nollywood filmmakers in US for training 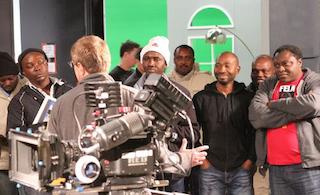 Two dozen filmmakers from Nigeria, the world’s third-largest producer of content are in the United States for a four-week intensive course at the Colorado Film School. Their overriding mission: to raise professional standards for future features in Nigeria and potentially allow their homeland to compete for international awards.

Nigeria trails only the United States and India in terms of volume of content, sometimes producing 1,000 titles a month. But many of them are for domestic consumption and the technological level of these films are considered below par.

Now, through an economic development grant in Nigeria entitled ‘Project Act,” the country has enlisted the help of CCA, a Colorado community college which houses the Colorado Film School, to raise the bar.

Andy Amenechi, president of the Directors Guild of Nigeria, said that the benefits wouldn’t be confined to the participants but through the dissemination of information after the group returns to Nigeria in terms of professional tutorials and on-set mentoring that the filmmakers will be able to proffer.

“Filmmaking is about doing the right thing,” Amenechi said. “There is no Nigerian, American or Taiwanese filmmaker. There are international filmmakers, and there are certain specifications you need to make films. And if you want to compete in the international marketplace, you must have those standards. There’s no left, right or center about it. So we have decided to be on the path of international best practices so that we can compete in the marketplace.”

The Nigerian grant focused on Colorado Film School to provide that foundational piece, given that the school has been cited as one of the top-25 film schools in the world by Hollywood Reporter magazine.

“It’s going to be a revolution,” Amenechi predicted. “I foresee a different style, a professional input into filmmaking from this program.”

The relationship between Community College of Aurora and the Nigerian Directors Guild began several years ago but gained steam when Nigerian student Ike Onyeka came to Colorado on his own to take classes at the film school. His colleagues back home were immediately impressed with the skills and knowledge Onyeka had gleaned during his time in the U.S. upon his arrival back home.

The full contingent arrived in late March after getting the proper visas from the Lagos consulate and will remain in the Denver area until late April.

“My justification when starting the film school was providing democratic access to the means of expression, and if we can do that on a global level, it’s a tremendous privilege and responsibility.”
said Frederic Lahey, director of the Colorado Film School.

Many of the Nigerian participants in the intensive program raved about learning how to take ideas and skillfully and artfully execute them.

As Amenechi put it, Nigerians are famous for being “storytellers for generations imparting knowledge of their people through tales by moonlight to children.”

An opportunity now exists to one day take one of those generational tomes and stand on the red carpet at Cannes or Los Angeles, allowing the world to watch and judge their work.

“That’s our aim at the end of the day,” Amenechi said. “But if we work at it, we’ll get there. South Africa had a program for five years dedicated towards an Oscar. After five years, they got an Oscar nomination because they worked at it. For us, we’re going to work at it from here.”