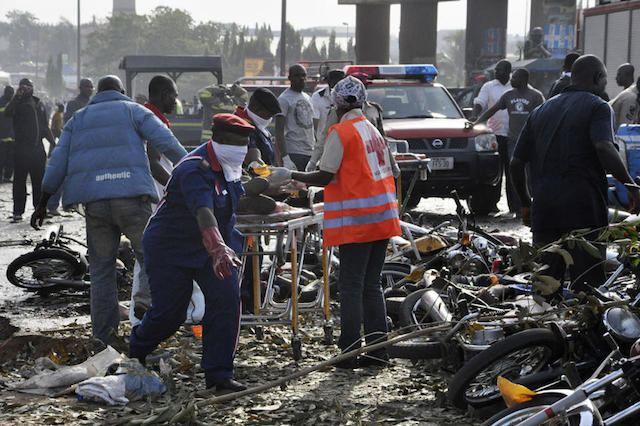 A scene after the blasts

Twenty four hours after the fatal attack masterminded by suspected Boko Haram insurgents at a Bus park at Nyanya, 16 kilometres outside Abuja, Nigeria’s capital city centre, the National Emergency Management Agency, NEMA, has stated that one more death has been recorded from the blast which rocked the city earlier hours on Monday.

While giving an update on the bomb incident to journalists in his office in Abuja, the Director-General of NEMA, Alhaji Muhammed Sani-Sidi, said the agency urgently needs blood for the treatment of the wounded victims and urged Nigerians to visit the various hospitals where the victims are hospitalized to donate blood.

He said the agency has received a report confirming that one of the victims has died at the Asokoro Hospital, thus bringing the number of death to 72.

Suspected insurgents were reported to have driven an Improvised Explosive Devices laden vehicle into the Bus park during rush hours as people headed to work yesterday and detonating the IEDs killing and mailing innocent citizens.