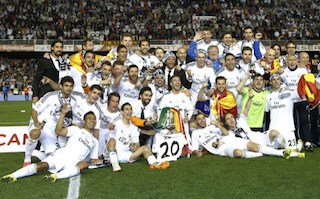 Gareth Bale scored a stunning individual goal five minutes from time to win the Copa del Rey for Real Madrid as they overcame Barcelona 2-1 at the Mestalla in Valencia on Wednesday.

The Welshman had previously been wayward with a series of efforts on goal, but he finally made his mark as he galloped through on goal from inside his own half before prodding the ball past Jose Manuel Pinto.

Madrid had gone in front after just 10 minutes as Angel di Maria raced onto Karim Benzema’s through ball and fired low into the corner.

Marc Bartra levelled for Barca 22 minutes from time when he headed home Xavi’s corner, but it was the young defender who was left in Bale’s wake as he sealed his first trophy as a Madrid player.

“It was definetely his most important goal for Madrid,” Real boss Carlo Ancelotti said of Bale’s winner.

“It was the defining moment in the game.”

Bale’s teammate Xabi Alonso was even more effusive in his praise for the goal which handed Madrid the trophy for the 19th time.

“It was incredible, I have never seen anything like it.

“It look like the ball was going out, but he kept pushing and ran off the field to get it. It was amazing.”

Barca boss Gerardo Martino, meanwhile, was left to reflect on a disastrous week as three consecutive defeats in three different competitions means they will almost certainly not win a major trophy for the first time in six years.

“Obviouly it is not a happy moment. It has been a very hard week for us, but there is nothing else we can do but look ahead to what remains in the league,” he said.

Without the injured Cristiano Ronaldo much was expected of Bale to fill the World Player of the Year’s shoes and he had the first two chances of the game as he dragged a shot across goal before Javier Mascherano deflected his next effort just wide.

Madrid were soon in front though as a flowing counter-attack involving Isco, Bale, Benzema and finally Di Maria set the Argentine free and his low shot just squeezed under Pinto’s outstretched hand.

Barca pressed for an equaliser for the rest of the half as Cesc Fabregas’ low cross was just too strong for Neymar to connect at the back post, whilst Jordi Alba saw a header comfortably saved by Iker Casillas.

However, Madrid still looked the more dangerous on the break and only a great challenge from Alba prevented Isco from turning home Bale’s cut-back to double his side’s advantage.

Lionel Messi was kept quiet for the majority of the game, but he had Barca’s best opening of the half when his snap shot from the edge of the area flew wide.

Bale was first to threaten again at the start of the second half as he waltzed past two weak Barca challenges and fired into the side-netting and then volleyed just over from the edge of the area.

Barca’s first effort on target didn’t come until 25 minutes from time when Bartra sauntered forward from central defence and stung the palms of Iker Casillas.

Bale had the ball in the net soon after but the goal was ruled out for a foul as he challenged with Pinto for a high ball.

Within seconds Barca were level as Bartra directed a perfectly weighted header from Xavi’s corner just inside the far post.

Both sides then had chances to win it in normal time, but it was Bale who got the winner as he escaped the attentions of Bartra down Madrid’s left and raced in on goal to slot home his 20th and most important goal of the season.

There was still late drama to come as Neymar latched onto Xavi’s through ball and smacked a shot off the inside of the post with Casillas beaten.

However, there was to be no late reprieve for Barca as they slumped to a third consecutive defeat for the first time in more than 10 years.