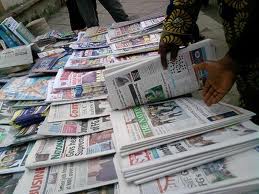 Nigeria’s minister of information, Labaran Maku has described as “unethical, unprofessional and insensitive’’, the manner some sections of the media presented the gory scenes of the Abuja bombing to the public.

Maku, a former journalist spoke after the Federal Executive Council meeting in Abuja. The meeting was presided over by President Goodluck Jonathan at the State House.

Maku said the meeting was essentially devoted to reviewing the early Monday morning bombing at Nyanyan bus park, with a view to taking pro-active measures for prevention and learning lessons.

The Minister said that council was displeased with the “unprofessional way the newspapers and television houses showed the gory pictures of dismembered bodies.

“We observed with regret that in spite of the great job the media has continued to do, we saw also that the way this incident was reported in the last two days has been really very insensitive.

“Council noted that it is really very unprofessional that newspapers and most of the televisions just unleashed gory pictures. They never could have been published on the basis of humanity, professional ethics and feelings for the sensibility of our people.

“We saw shredded bodies on some pages of newspapers. This does not happen in any part of the world because journalism has a responsibility to the sensitivity of people.

“Newspapers are read and televisions are watched by minors and it is expected that in cases like this, our professional training, our commitment should be uppermost in the way we report what has happened. We will continue to urge the media, although we expect that whatever happens must be reported, but, in reporting we must show extra care for the psychological health of our citizens and the image of our nation.

“ We collectively feel that those gory pictures that were splashed on the front and inner pages of newspapers and the television screens could not have been the case. You will notice that throughout the 911 incident in the USA, hardly was any picture shown of the victims.

“It showed disrespect for the dead, disrespect for the living and absolute lack of sensitivity to the health of the public. We will continue to urge that in fighting terror, all of us have our roles to play and there is the need not to overlook the details of professional commitment’’, he said.

On President Jonathan’s presence at PDP unity rally in Kano a day after the bombing, Maku said it was not an insensitive act.

“It was a loud statement that terrorists can never stop this country from moving and from working.’’

Maku noted that on the day of explosion, the President suspended his trip to Ibadan for the centenary of the Olubadan as wall other engagements.

“One thing that terrorists want is to paralyse the society and to make sure that they keep you and I at home, frustrate every normal activity of society.

“They will continue to do it again and again, so that when they strike, government stops and everything stops, they will be very happy.

“On the day the terrorists struck, the President cancelled his trip to Ibadan and other engagements, and visited the scene personally and directed all services to provide support.

“Do not forget that this pain is to the President of this country more than any other person in this nation today.

“This president has suffered psychologically as a result of this criminality which terrorists carry out to distract the public and disrupt the normal activities of government. The intention, among others, is to set people against the government, so that when people die, whatever the government say, is not what people will hear.

“You will notice that whenever there is any significant story something will just come negatively. So, the purpose is to demoralise and disrupt government and society to set people against each other and create paralysis.

“So, if we are to say we will do nothing because of the strike, then it means that terrorist would have succeeded in putting a stall each time they strike in our country. And I think going to Kano was a loud statement that terrorist will not stop this country from moving and from working’’, he said.

Maku appealed to politicians not to exploit the suffering of the people just to score cheap political points.

The minister said the council underscored the need for the nation to be united against terrorism and reassured government’s commitment with the support of the people to defeat the evil.