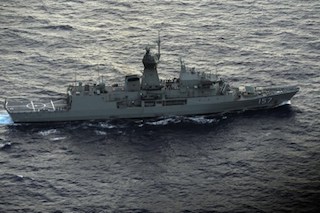 Australian ship HMAS Perth is guided into position by the RNZAF aircraft to recover a red object during the search for missing Malaysia Airlines flight MH370,

PERTH (AFP) – The mini-submarine hunting for flight MH370 will finish scouring its current strip of the Indian Ocean within a week, Australian Prime Minister Tony Abbott has said, adding that if unsuccessful the operation will be forced to move into a new phase.

Abbott told the Wall Street Journal on Wednesday that authorities will need to rethink their approach if the US Navy mini-submarine fails to find wreckage from the missing Malaysian jet in its current search zone, 2,000 kilometres (1,240 miles) off Perth.

“We believe that search will be completed within a week or so,” Abbott told the US newspaper.

“If we don’t find wreckage, we stop, we regroup, we reconsider.”

The unmanned Bluefin-21 submersible on Thursday completed its first full mission in the search zone, where underwater signals — believed to be from the missing plane’s black box — were detected earlier this month.

Data retrieved by the mini-submarine is being analysed.

The mini-sub’s first two attempts to scan the seabed for signs of the Boeing 777, which vanished on March 8 with 239 people on board, had to be cut short — on Tuesday because the water was deeper than its 4,500-metre operating limits, and on Wednesday because of an unspecified technical problem.

“My determination for Australia is that we will do whatever we reasonably can to resolve the mystery,” Abbott said.

“If the current search turns up nothing, we won’t abandon it, we will simply move to a different phase,” he added, reiterating his confidence that searchers were looking in the right place.

The Bluefin’s aborted first two missions have raised the spectre of a prolonged, difficult search that may require even more sophisticated equipment to be deployed.

The US Navy has estimated it would take the sophisticated device “anywhere from six weeks to two months to scan the entire search area”.