How Nigerian Youth Stabbed Mom To Death In UK 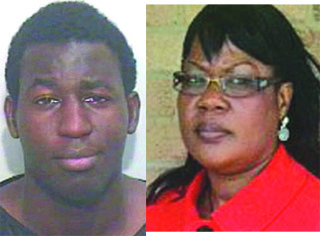 A court in the United Kingdom has heard how a cross-dressing Nigerian youth stabbed his mother to death in a frenzied attack before dressing up in women’s clothes to try and fool neighbours into thinking she was still alive.

Daily Mail reports that Emmanuel Kalejaiye, 21, inflicted more than 40 stab wounds on his mother Tolu Kalejaiye’s upper body, when he turned the knife on her at their Wickford home last September.

The prosecution alleged Kalejaiye had planned to commit the ‘perfect murder’, by killing the 44-year-old before impersonating her to allow himself precious time to dispose of her body.

But a jury of seven men and five women found the Essex University student not guilty of murder, but guilty of manslaughter by reason of diminished responsibility, due to mental health issues.

Judge Christopher Ball QC said: ‘The evidence shows the defendant is capable of a very deliberate and calculated act of supreme violence.

“If as a paranoid schizophrenic he is capable of this, he may present a very significant danger to anyone who upsets him for many years to come.

“I am keen to see the extent to which paranoid schizophrenia will underscore the danger he poses to others in the future to assess a proper sentence.”

Judge Ball requested a full psychiatric report into the danger Kalejaiye could be to the public ahead of sentencing in June.

The court heard Kalejaiye had written out a detailed plan including notes on how to walk in high heels and had receipts for pink Primark women’s clothing.

Police found a bloodied pink hoodie and pink trousers, which Kalejaiye had bought from Primark a month earlier, as well as scraps of paper detailing an alleged murder plot.

The jury heard how Kalejaiye, who was born in Nigeria but moved to England as a small boy, stabbed his mother to death on the morning of September 26 last year.

Receipts found at the house showed the murder weapon came from a knife block bought by Kalejaiye at Lidl just a month before the brutal stabbing.

Mrs Kalejaiye, who worked as an accountant for Camden Council, suffered more than 40 stab wounds to her head, face, neck, upper limbs and hands during the frenzied knife attack.

She called boyfriend, Leo Shogunle, on her phone during the attack at around 7.30a.m. – although he only received the message when he awoke later that morning.

Kalejaiye sat head in hands as the jury was played a disturbing three-minute voicemail in which the mother-of-two can be heard screaming “don’t stab me, don’t stab me – you’re a demon”, before the message fell chillingly silent.

Mr Shogunle raced to the home shortly after 10 a.m. on the day of the attack after hearing the message and let himself in using a spare key.

He was confronted by the bloodied body of his lover lying on the kitchen floor and Kalejaiye, who said his mother had been attacked before fleeing the scene.

Kalejaiye was later caught on CCTV at around 10.30a.m. calmly buying a can of coke and a pack of Maryland cookies at a local post office before handing himself in to police.

During police interview, he signed a confession stating: “I admit killing my mother this morning by stabbing her.

“I did this because she subjected me to a lifetime of physical and mental abuse.

“She used the Bible to rationalise what she did to me. I believe she manipulated and brainwashed me.

“I have been very depressed for a long time. I have tried to overcome it but I couldn’t take it anymore.”

Kalejaiye later changed his story saying a gang of masked men burst into his home, forced him to stab his mum then threatened him with further violence if he told police.

He told the court a gang of five white, balaclava-clad men targeted him in a suspected racist attack.

The university student went on to claim the mystery men had forced him to dress up in the ‘ill-fitting’ pink clothing and pink flip flops to move his mother’s Mercedes car – a move the prosecution claimed had been an attempt to fool neighbours into thinking his mother had driven to work.

Evidence from an expert psychiatrist stated Kalejaiye had been suffering from severe depression and paranoid schizophrenia at the time of the attack.

The court heard how fellow students at Essex University, where Kalejaiye had studied biochemistry, found him ‘weird and paranoid’.