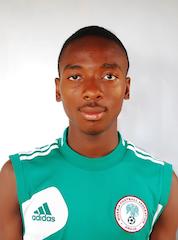 Golden Eaglets’ coach Emmanuel Amuneke has picked Kelechi Nwakali to captain his fledging team at the WAFU B Under-17 Tournament in Togo.

Kelechi is the younger brother of Chidiebere Nwakali, the Manchester City’s youngster who played a pivotal role when Nigeria won a record fourth title at the 2013 FIFA Under-17 World Cup in the United Arab Emirates.

Amuneke said he settled for Kelechi because the attacking midfielder has demonstrated overtime the capacity to lead others. The lad nearly gate crashed into the 2013 World Cup-winning team but for an unfortunate injury on the eve of departure to Abu-Dhabi.

“Kelechi has shown that he’s about the most experienced about the demands of playing for the national team amongst the players we have at present ,” noted Prince Udofia, the Golden Eaglets’ Coordinator.

So far, Kelechi has shown some sterling qualities not least on the pitch where he roams in the midfield like a gazelle. He has been among the goals for the team and his cracking long-range goal in the 2-1 win against College of Football, Abuja is rated as one of the team’s best effort so far.

Meanwhile, the Golden Eaglets departed Lagos for Lome Thursday with Alhaji Yussuf Fresh, a board member of the Nigeria Football Federation (NFF) as the leader of delegation. In the contingent also is Mr. Patrick Pascal, former Nigerian international who is a Special Assistant to NFF’s President Alhaji Aminu Maigari on Technical
Matters.
Fresh said that the tournament in Togo offers the players the opportunity to show what they can do at a competitive level after a remarkable five wins in trial matches before their departure to the neighbouring West African country.
The Golden Eaglets were drawn against Mali and Niger in Group B at the six-nation tournament; and will open their campaign against Mali 5:30 p.m on Saturday at the Municipal Stadium.