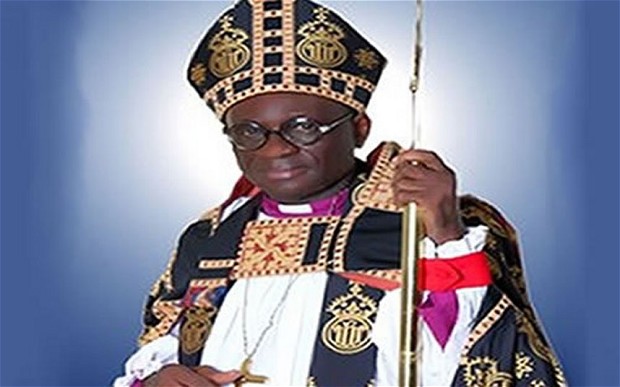 Three men suspected to be the kidnappers of Bishop Ignatius Cosby Ogborun Kattey, the Anglican ArchBishop of the Niger Delta, and his wife, Beatrice, on 6 September last year, have been arraigned before a chief Magistrate’s Court sitting in Port Harcourt.

They were arraigned by the Rivers State Director of State Security Service (DSS), Mr. Apok Nyam.

Charged were: Chibueze Nwaogba, Onyedikachi Emmanuel Okoro and Philip Chikaodiri Ogbuewu. They were accused of serial kidnapping of people in the state and collecting varied ransom.

They were accused of abducting ArchBishop Kattey and his Wife, Beatrice, at Aleto Bridge, Eleme, in Eleme Local Government Area of the state.

The Rivers State director of DSS,alleged that the accused persons collected the sum of N10 million as ransom before releasing the Archbishop.

According to the DSS,the suspects, who are facing a 17-count charge, were also accused of abducting one Ukel Jerome Agba, on 13 February last year at Pipeline, in Aleto, Eleme, in the same local government area.

He said N5 million was collected by the accused persons before the victim regained freedom.

In the same vein, the three men were also accused of collecting a ransom of N3million after abducting on 15 February last year, Mrs. Anna Agba.

On February 13, 2013, at Pipeline, in Aleto, Eleme, the three arraigned suspects were also alleged to have abducted one Chidiebere Nwawuba, and later collected N2 million before releasing their victim.

The gang was said to have kidnapped Dr. Lasisi Adebukola, on December 12, 2012, at Ebube, Eleme, in the same local government area. The accused persons received N1 million as ransom before releasing their victim.

On May 2, 2013, the three accused persons and others at large, allegedly abducted Dr. Ezem Fidelis Chidozie, at Sand Field Road, Aleto, Eleme, and N1.3 million was paid for his freedom.

Accused persons were said to have on or about May 17, 2013, abducted Engr. Bernard Azuwuike Ezem, near Eleme forest and received a ransom of N800, 000 for his release.

The complainant also alleged that the accused persons, on August 7, 2013, kidnapped one Fred Mbobo Igwe along East/West road, Elelenwo.

They also allegedly abducted one Iheakanwa Felix Arinze on May 31, last year, at Aleto bridge, by Petrochemical, also at Eleme Local Government Area. The accused persons were paid N1.8 million as ransom for his release.

However, no plea was taken, as the trial Chief Magistrate, I. Agbesor, ordered that they should be remanded in prison custody because the court lacked jurisdiction to hear the matter.

He directed that their case file should be referred to the Director of Public Prosecution (DPP) for legal advice. The case was adjourned till September 1, 2014.
ends