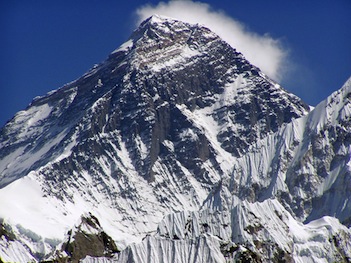 At least nine Nepalese climbing guides have been killed and three others are missing after an avalanche struck Mount Everest early today in one of the deadliest accidents on the world’s highest peak, officials said.

“Rescuers have already retrieved four bodies and they are now trying to pull out two more bodies that are buried under snow,” Ang Tshering Sherpa, president of Nepal Mountaineering Association said.

The avalanche occurred at around 6:45 am at an altitude of about 5,800 metres (19,000 feet) in an area known as the “popcorn field” which lies on the route into the treacherous Khumbu icefall, Sherpa said.

Mohan Krishna Sapkota, Tourism ministry spokesman, said the climbers were all Nepalese and were preparing the route to the summit ahead of the summer climbing season which kicks off later this month.

“The sherpa guides were carrying up equipment and other necessities for climbers, when the disaster happened,” Sapkota said.

“Rescuers have found two people alive, and they are trying to find six others who are still missing,” he explained.

Another tourism ministry official said three rescue helicopters had been deployed to scour the site and airlift the injured to safety.

The Kathmandu-based climbing company Himalayan Climbing Guides Nepal confirmed that two of their guides were among the dead and four were missing.

The disaster is among the worst to strike the mountain, which saw eight people die in total during last year’s month-long summer climbing season.

In 1996, eight people died in a single accident during a doomed expedition immortalised in the best-selling book “Into Thin Air” by mountaineering journalist Jon Krakauer.

More than 300 people have died on Everest since the first successful summit by Sir Edmund Hillary and Tenzing Norgay in 1953.

Every summer, hundreds of climbers from around the world attempt to scale peaks in the Himalayas when weather conditions are at their best.

As concerns of overcrowding on the “roof of the world” have grown, Nepal’s government earlier announced plans to double the number of climbing ropes on congested ice walls near the summit of Everest to reduce traffic and risks to climbers.

Authorities have also stationed soldiers and police at Everest base camp starting this month so climbers can approach officers in case of any trouble following a brawl between commercial climbers and Nepalese guides last year.