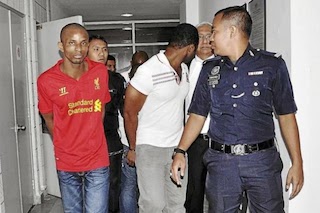 4 Nigerian students being marched to prison in Malaysia

Nigerian Students in Malaysia said they are fed up with the constant intimidation, harassment and illegal arrests carried out on them by Malaysian authorities while staffers of the Nigerian High Commission are indifferent in complete disregard of their diplomatic responsibilities of protecting them.

In an open letter to President Goodluck Jonathan, the Nigerian students under the aegis of NANS Asia, catalogued a series of harassments and injustice suffered by them in the hands of the Malaysian police and the judicial authorities. The students even accused their schools of conniving with their ‘harassers’ to deny them of their school fees.

The petition was signed by the association’s president, Prince David O.C Nwaogwugwu.

Nwaogwugwu said the Nigerians “are now constantly being duped of their tuition fees and falsely accused of crimes not committed by the institutions they study in, their apartments being regularly raided even without warrants, blackmailed and set up for the purpose of extortion, falsified evidence accepted by judges against them in courts which are presented by the police and prosecutors, deported by the immigration authorities for the failure of the institutions of learning and the same immigration departments who fail to quickly process the renewal of Visa for these Nigerian students who have handed in their passports for weeks, months and even years”.

He blamed the Nigerian High Commission Staff in Malaysia and Asia at large for being complicit, indirectly in the grave injustice meted out on Nigerian students, in not responding to their plight on time and in being discriminatory when responding.

“There are several cases where police officers in connivance with school security personnel’s, local and foreign agents and lawyers go after students who they believe have financial backing at home. They blackmail such students and threaten to put them in trouble if they do not pay certain amounts of money. Some of the students who refuse to be oppressed by such threats are then arrested, taken to court and false evidence presented against them. In the courts, the prosecutors do not allow the students to speak in protest or self defense. The proceedings in Malaysia courts against Nigerian students are carried out in the Malaysia language of which Nigerians schooling in Malaysia are not mandated by any law to study Malay and therefore do not understand what the prosecutors are telling the judge or what the judge is saying to the court”, Nwaogwugwu said.

Among the cases listed by Nwaogwugwu was that of Nkem Okpa, a research student who was detained for 11 days on mere suspicions three years ago.

There were other cases:

1. Gabriel (2010): Arrested on the street and thrown into a bus with some people who had been arrested for drug possession. He had never met the other people arrested with him before. Gabriel was in Sungai Buloh Prisons until 2013 when the culprit pleaded guilty. Gabriel’s entire life has been ruined for nothing.

2. Oyewole (2013): Student arrested for not being in possession of his passport which had been submitted to his school for visa renewal. The Police went ahead to carry away cloths and electronics in his apartment.

3. Segun (2013): House mate to Oyewole. They were arrested together and their possessions stolen by the police.

4. Adeniji (2013): A student arrested and deported while his passport had been submitted to school for renewal.

5. Victor (2013) Student arrested on the school campus for being in possession of drugs he knew nothing about. His house mate confirmed he was set up. In court, the police presented false evidence against Victor. Victor refusing to be blackmailed by the schools security and the police inspector in charge of the case spent about 3 months in remand until his parents told him to plead guilty and be done with it. The High commission was informed but nothing was done about it.

6. Bartholomew (2013): Arrested for a crime he knew nothing about. Evidence and witnesses prove his innocence but he is still locked up in Jail and the Nigerian High Commission is saying nothing.-Body Number : 313….

7. Umar Garkida (2013): Arrested from his hostel, false evidence of drugs presented in court against him. He has refused to be intimidated to plead guilty and has been in jail since November while the High commission and his school are silent.

8. Fahat Sanda (2013): Arrested from his hostel, false evidence of drugs presented in court against him. He has refused intimidation, refused to plead guilty to a crime not committed and so has been in jail since November. The school and High commission are silent.

9. Umar (2014): Arrested from in front of his hostel by the police. Asked for his passport which he had submitted to the school for renewal of Visa, he stated his case and presented his ID as the Student Rep President alongside his student ID, but the police insisted on arresting him unless he paid some bribe. Umar called Mr Banum the head of the school security to come and identify him as the Student Rep President, but he never came. The police officer then arrested Umar and took him to the station and threatened to put him in trouble. Umar then succumbed to the threat and paid Rm300 to regain his freedom on the spot. On returning to the school premises, Umar confronted Mr Banum to know why he refused coming to identify him but there was no response. He then requested that the money he paid be refunded of which Mr Banum said he will refund him and write a petition against the officer in question. Till date, nothing has been heard about the issue.

10.. Several Nigerian students in February 2014 were arrested within their school premises by the police and immigration personnel’s for not being in possession of their documents which had been submitted to the school and hence immigration for renewal. The School ignored these students for about 2weeks to suffer in detention and the High Commission did nothing.

Nwaogwugwu’s letter also catalogued a number of Nigerian students killed in the country. Among them were:
1. Onoche Martins (March 2012): Master degree student. Killed by Malaysian Police personnel’s after he allegedly outraged the modesty of a 43year old lady by hugging, kissing and exposing himself by 11am. These accusations do not make sense to any sane being. Nothing has been heard from the Nigerian High Commission.

2. Solomon Okolo (March 2013): Student from Delta state. Killed by Malaysian citizens in the presence of Malaysian police officers after crashing his vehicle. His wife was at the scene of the incident and to date, nothing has been heard about that case or the culprits. The High commission is silent.

3. Tunde Adelabu (March 2014): A Student Killed by Malaysia policemen who ran away after shooting him. Later on, the policemen came back and arrested Tunde’s friend who had witnessed the shooting. Today, nobody knows where this boy has been taken to or if he is still alive. The school he attended are now denying he was ever their student. The High commission is still silent.

4. In India on the 25th of March 2014, Two Nigerians were found stabbed on Devli Road, New Delhi. One of them succumbed to injuries and died while the other is at the AIIMS Trauma Centre.

The students want President Goodluck Jonathan to intervene in their matter.