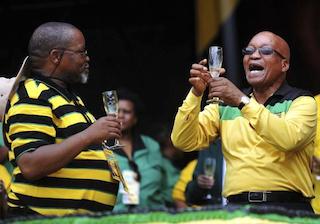 South Africa’s general election is still several weeks away, but President Jacob Zuma may begin to pop the champagne with pollsters already projecting another landslide victory for his party, the African National Congress (ANC).

The latest poll published published by South Africa’s Sunday Times newspaper, said the ANC is likely to win 65.5 percent of the vote in the 7 May election, only a shade lower than the 65.9 percent it won at the last national elections in 2009.

This margin of victory will guarantee the ANC nearly a two-thirds majority, confounding analysts who had predicted a fall in support for South Africa’s ruling party 20 years after the end of apartheid.

Madonsela judged that Zuma had benefited unduly from the upgrades, which included a swimming pool, chicken run and amphitheatre at his residence at Nkandla in rural KwaZulu-Natal, and should pay back some of the money.

While overall support for the ANC remained largely unaffected by the Nkandla scandal, the poll said Zuma’s personal approval ratings had slipped to 62 percent from 65 percent before Madonsela delivered her findings.

The poll also showed that the Democratic Alliance, the main opposition party that already governs the Western Cape province, was on track to build its national support from 16.6 percent in 2009 to 23.1 percent this year.

The ANC has presided over strong economic growth since the end of apartheid in 1994, but Zuma’s first term in office has been rocky, reported Reuters.

The economy slipped into its first post-apartheid recession in 2009 and has struggled to regain the growth rates it logged before the global financial crisis.

The government is expecting economic growth this year of 2.7 percent, way below the levels needed to make any in-roads into 25 percent unemployment.