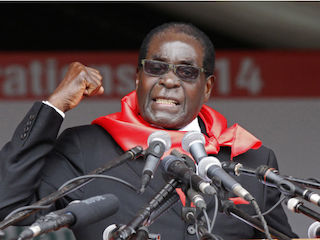 Campbell relied on the Corruption Perception Index published by Transparency International to reach his conclusion. In the last edition, Mugabe’s Zimbabwe was rated 157, while Nigeria was rated 133.

Besides, the 70 year old Campbell, who was US ambassador to Nigeria between 2004 and 2007, described the controversy as needless distractions for the two countries.

Here is the full posting on his Africa In Transition Blog. It is entitled “Zimbabwe and Nigeria: Mirror, Mirror on the Wall, Who is the Most Corrupt of Them All?”

“Robert Mugabe, the poster boy for bad governance in Africa, said last month that Zimbabweans were behaving “like Nigerians” with respect to bribes and corruption. This, he implied, is not a good thing.

“The administration of Nigerian president Goodluck Jonathan was apparently enraged. On April 11, the Nigerian Foreign Ministry called in the senior Zimbabwean envoy in Abuja to protest, characterizing Mugabe’s comments as “vitriolic and denigrating.” According to the News Agency of Nigeria (NAN). The ministry’s statement continued, “not only does it not reflect the reality in our country, but to come from a sitting president of a brotherly country is most unkind and very dishonorable.”

“Transparency International’s well-regarded “Corruption Perception Index” lists Nigeria as 133 out of 175 countries, and Zimbabwe at 157. The country ranked one (Denmark and New Zealand tied) is considered the least corrupt, that listed 175 (Somalia, Afghanistan, and North Korea tied) as the most corrupt. So, Mugabe is wrong: Zimbabwe is more corrupt than Nigeria. Nigeria faces the Boko Haram insurrection in the north, ethnic and religious conflict in the Middle Belt, and the prospect of renewed insurgency in the oil patch. Zimbabwe remains an international pariah and faces unresolved succession issues.

“Nigeria may feel especially stung by Mugabe’s comments because it prides itself on the assistance it provided to southern African liberation movements in the days of apartheid in South Africa and Ian Smith’s white-ruled Rhodesia. But, perhaps it is also a useful distraction for both countries to quarrel over which is the more corrupt than to face their numerous other internal challenges.”