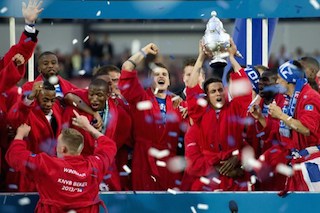 Ajax suffered a 5-1 humiliation in Sunday’s Dutch Cup final at the hands of unheralded Zwolle with the match held up when angry fans of the Amsterdam giants pelted the pitch with smoke-bombs and fireworks.

PEC Zwolle, based 120km to the north-east of Amsterdam, were a goal down after just three minutes before sprinting into a 4-1 lead at the break on their way to their first Dutch Cup triumph.

But the game was twice held up — including for half an hour just after the start — when Ajax fans hurled flares on to the pitch and play was delayed to allow smoke to clear.

Ricardo van Rhijn put Ajax ahead after three minutes but Ryan Thomas and Guyon Fernandez scored two each before half-time to put Zwolle in charge.

Zwolle qualify for the Europa League while Ajax are on the verge of a 33rd league title which they can secure next Sunday.